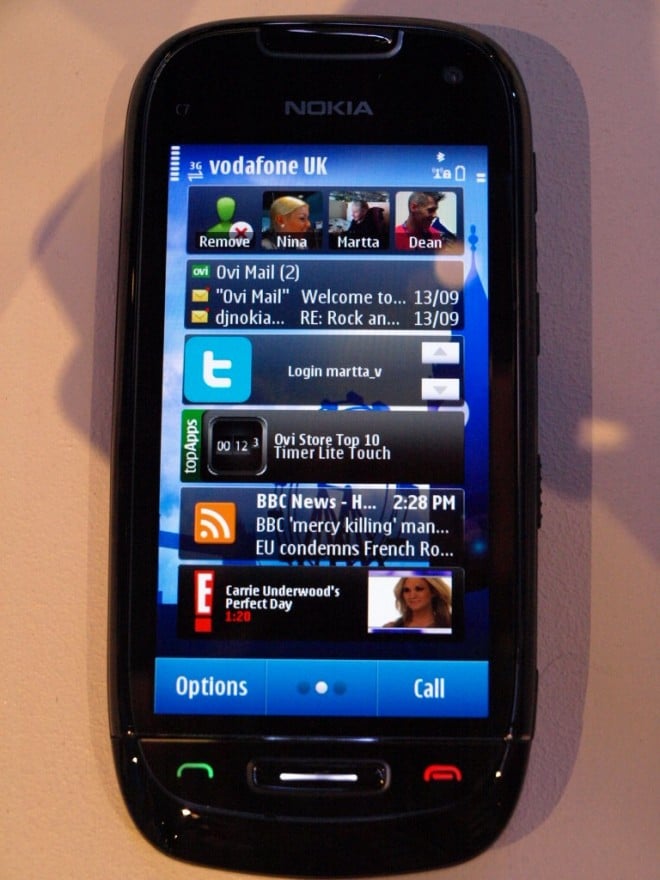 The new Nokia C7 is, by all measures, a lesser smartphone than the Nokia N8 – which is Nokia’s Symbian^3 flagship, due to hit market in the coming weeks. The C7 has a down-rated camera and less onboard storage than the N8, but that doesn’t mean the C7 is a bad phone. Nokia announced today at Nokia World 2010 London that the C7 would head up the company’s social-networking smartphone portfolio and make it possible to for the masses to have an affordable Symbian^3 smartphone. We went hands-on with the Nokia C7 recently, and it’s actually fairly similar to the N8 just toned down to hit a lower price point. Whether or not that’s a good thing depends on your perspective.

The Nokia C7 feature-set looks similar to the N8 multimedia flagship, but don’t let that fool you. The N8 is a much higher-end device. Where the N8 uses a 12-megapixel camera with a mechanical shutter and Carl Zeiss optics, the C7 uses an 8-megapixel shooter with no mechanical shutter and no Carl Zeiss branding. The C7 also sports less onboard storage, leaving it with just 8GB of memory. It does boast the same penta-band 3G (850/900/1700/1900/2100Mhz) 3G radio, WiFi (B/G/N) radio, and GPS receiver as the N8, but lacks the HDMI-out port that makes the N8 a multimedia monster. And, while the N8 is a bit on the thick side, the C7 comes in at less than 11mm thin (not as thin as an iPhone 4, but still quite thin). It’s also 70 Euro cheaper than the N8.

That last bit about the price is pretty much the biggest feature of the C7. It’s not significantly cheaper than the decidedly higher-end N8, but the C7 spec-sheet is considerably lacking, compared to the N8. Is that a problem? Well, that depends on your personal taste.

If you’re just looking for decent features attached to a more affordable price tag and a slimmer, curvier profile, the C7 might be your best fit. If you don’t care about camera quality, then the N8 really doesn’t make sense for you. Think about it – the C7 slides into any pocket comfortably and offers features that won’t get you laughed out of the geek club. You get to save 70 Euro and still get Symbian^3 with all kinds of connectivity at your fingertips. That could be a good thing for you.

Now, imagine for a minute that you always want the latest gadget with all the trimmings. In this case, the C7 will definitely be a disappointment. The Nokia C7 sports a camera that’s easily outgunned by the N8’s camera. You don’t get the solid aluminum casing. You don’t get the geeky-cool color options. The C7 only offers half the internal storage of the N8. To people that need the coolest toys (people like us), the C7 just won’t do. Especially if the difference in price is less than 100 euros. But, like we said before, your opinion will depend on your perspective.

Symbian^3 seemed to run just as well on the C7 as the N8, but that’s not saying much. We’re not sure if it’s due to the non-final software on the demo units or if it’s an inherent problem with S^3, but the UI just seems a bit slow. Try to swipe a homescreen pane to one side and you’ll be greeted with a noticeable lag between the time you swipe at the screen and the time it takes for the homescreen to start sliding. S^3 is a bit clunky, in the same way that S60 was clunky – menu-based interactions that aren’t all that intuitive. To it’s credit, though, Symbian^3 is much improved over S60, and will only get better with Symbian^4.

In the end, the C7 is a cheaper S^3 phone that’s going to save you some bucks. We really only see the C7 appealing to super budget-minded types and girls that need a phone that’s not as masculine as the N8. If you don’t fit into either of those categories and you still want a C7, more power to you, we’ll just continue to not understand your perspective.

Nokia Picks on Apple and Google, Sells 260,000 Phones Per Day

Nokia World 2010 is alive and well, and VP Niklas Savander wasted no time in talking up the brand as...