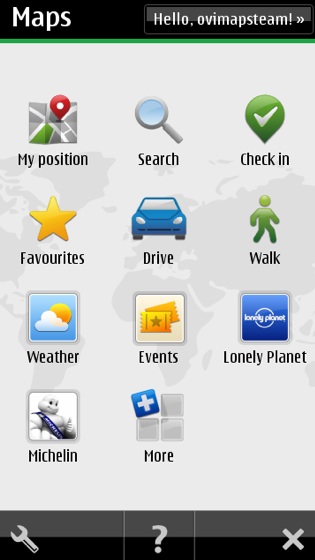 Nokia has released a beta version of their Ovi Maps application that finally brings it somewhat on par with what Google has been offering for some time now. With version 3.06 there’s pinch to zoom support added, sadly only for Symbian^3 devices though, the ability to check-in to various location based services such as Foursquare or Facebook, and the feature I’m looking forward to the most: public transportation navigation. Now whenever I mention Ovi Maps I get a ton of hate mail because I still highly recommend people use Google Maps. The one and only feature that Ovi Maps has that makes it worth it to some people is the ability to store maps on your mobile phone. Meaning unlike Google Maps, who constantly streams map tiles to your device, you can realistically use Ovi Maps without an internet connection.

Oh and there’s the whole free navigation thing. That’s a big one if you’re driving a car … but for the people who mainly use their feet or bicycle to get around, turn by turn navigation is a little overrated, if not excessive. The thing that keeps on holding me back from recommending Ovi is the terrible search engine. You’d think that when you spend a little over $8 billion on a company that does maps they’d also have a massive points of interest database, but you’re wrong. Search for “supermarket” on a Nokia N97 here in Finland and it’ll tell you to check out a Walmart in Tennessee. Search for “bar” and it’ll show you the bars that have the name “bar” in them, but nothing else. It’s pitiful to the point of confusion as to how the Ovi service got through user testing.

I salute the team in Berlin who are working on Ovi Maps. You get better and better with each and every release, but sadly so does Google. And they release a hell of a lot more often than you do. Stop adding features, fix search.

If you're like me, you're obsessed with the mobile game Angry Birds and the lite beta version which hit earlier...