About a month ago Nokia launched the X3 Touch and Type, the first touch screen based Series 40 device [read: dumb phone aka feature phone] with a touch screen. Today they’re launching the second of such style of device, the C3 Touch and Type. Unlike the X3, the C3 has a standard T9 keypad. It’s going to come out by the end of this year and will cost 145 EUR before taxes and subsidies. The entire body is made out of stainless steel, it has quadband GSM/EDGE so you’re never going to be in a country where you can’t make a call, it’s also got a 5 megapixel camera with flash. WiFi is on board, but sadly GPS didn’t make the cut.

The C3 Touch and Type measures 111 mm tall x 47.5 mm wide x 11 mm thick, which would have been impressively thin in 2007, but today it’s just average, if not a bit chunky. Colors available will be Silver, Warm grey and Khaki Gold. Oh and the touch screen, it measures 2.4 inches so … yea, not much you’re going to be doing on that except poking and prodding with your fat fingers, trying to hit the right icon.

I’m really digging the design of this thing, and I’m slightly pissed that this doesn’t have GPS. It would have made an awesome backup device to have during long holidays when I don’t want to take my beefy smartphone with push enabled email, instant messaging, and all that other internet connected nonsense with me. Maps however, I need. Since my first GPS enabled phone, the Nokia N95, I’ve totally lost the ability to navigate and find out where I am. It’s embarrassing I suppose, but then again it’s only now just become acceptable that people don’t bother remembering their mobile number. Soon not knowing your address may be just a equally useless thing to know.

Not with the C3 Touch and Type though. Damn. 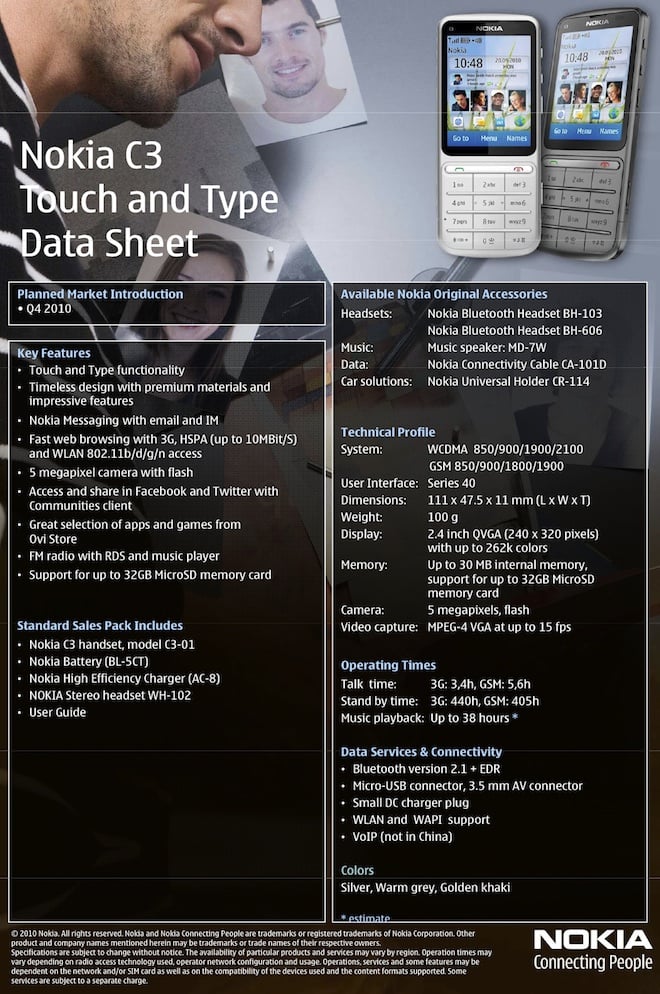