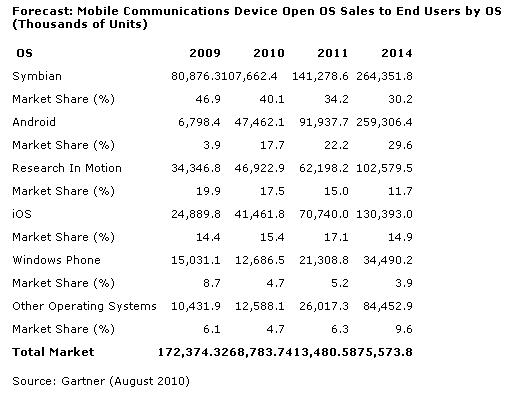 A recent study from Gartner is forecasting mobile platform market share up to 2014, and echoes the results of earlier studies regarding Android’s current momentum. Specifically, Gartner says Android will just barely squeak ahead of BlackBerry’s number two spot in 2010, and have a significant lead by 2011. Despite a steady decline, Symbian will still be number one with 30.2% of the market by 2014, but Gartner says they’ll have almost be overtaken by Android at that point, who will command a 29.6% share. Windows Phone 7 won’t last according to the forecast, and that’s not too hard to envision considering Windows Mobile’s fate. iPhone’s iOS will drift a bit higher, but ultimately have the same market share four years from now.

It’s a bit unfair to compare all of these platforms directly, however. Symbian will obviously have a big lead because of Nokia’s entrenchment in low-end feature phones across the entire world, while all of the other players are aiming to make high-end smartphones. Android has the added advantage of recruiting many manufacturers to its cause, and even though Windows Phone does too, it’s starting more or less from scratch. iOS has spanned more than just phone since the iPod Touch was released, and with iPad in the picture, it seems unfair to pit the entire platform against the likes of BlackBerry, whose operating system is solely focused on mobile phones.

All of that being said, take these research results as you will. It’s hard to argue with the growing popularity with Android, but how it stacks up against the competition in a couple of years’ time is really anybody’s guess.

Crank up the rumor mill as another from the very flaky Digitimes says that HTC is going to be offering...