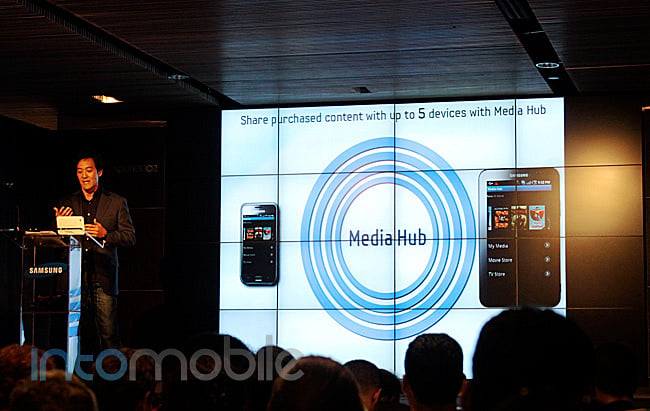 Samsung officially unveiled its Media Hub for the U.S. market and this content delivery system could become a powerful counterbalance to Apple and its iTunes behemoth and it could also make the company’s Android phones multimedia powerhouses.

When we reviewed the AT&T Captivate, T-Mobile Vibrant and the Epic 4G, the Media Hub was a part of the operating system but it hadn’t been turned on yet. The new Media Hub will enable users to watch movies and television shows that have been optimized for these smartphones.

The Samsung Media Hub will give you access to new and library content and you’ll get next-day access to television shows. The company said its availability will be imminent and that the pricing will be similar to other services. The media partnerships include MTV, NBC Universal, Warner Brothers and more. You’ll also be able to share your purchased content with up to five Galaxy devices, including the Galaxy Tab.

Many companies have tried to make their content delivery systems a key part of their products but most of these have failed. The one big exception is Apple and its iTunes. I’m convinced that part of the reason the iPhone was such a success is that iTunes made it ridiculously easy for existing users to purchase media and apps on the go. I believe iTunes is a major reason why the App Store is so full of programs and why iPhone owners generally purchase more apps than Android owners.

Samsung Media Hub will likely only be available on Samsung Android devices (there’s a remote possibility that it could license it out but I doubt it), so it won’t be able to reach the growing army of Android users. The Samsung Media Hub could succeed though because the company has a ton of products like televisions and Blu-ray players and it could easily bring this content-delivery system to these.

The first decent Android tablet has been officially announced by Samsung today. The Samsung Galaxy Tab, which we were very...