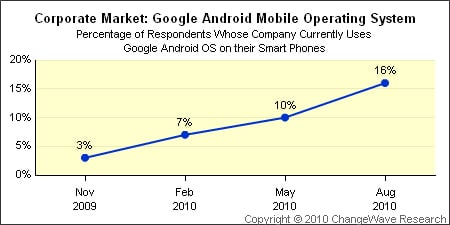 A ChangeWave survey of 1,602 corporate IT buyers reveals that Google’s mobile OS is on the rise in the corporate marketplace. Android usage in the business world has steadily climbed since November 2009 when a mere 3% of companies reported using Google’s mobile platform. Over those past nine months, Android has recorded a fivefold increase, climbing from that 3% up to a high of 16% in August 2010. The biggest jump occurred in the past three months, when Android jumped up 6 percentage points from 10% in May 2010 to its current 16%. 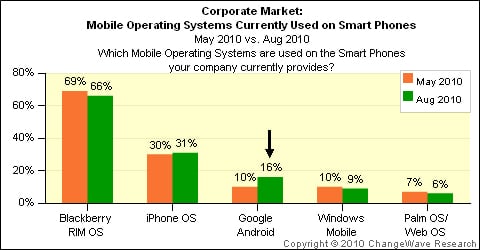 While Android is on the upswing, RIM and its BlackBerry devices have seen a slight decline from a market dominating 69% in May 2010 to a 66% share in August 2010. RIM is in a similar position as Nokia; both companies dominate their respective markets but are seeing their lead slowly erode while Google and Apple make significant gains. The Torch is fizzling out and RIM, like Nokia, needs to hit a homerun with its future BlackBerry handsets. Let’s hope RIM has better luck than Nokia whose flagship N8 handset may (or may not) be delayed. 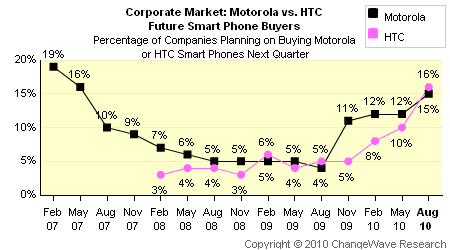 Android’s increase is driven by Motorola and HTC, both of which have shown astonishing gains over the past year as more companies commit to buying Android handsets in the upcoming quarters. Following the release of its DROID series of handsets, Motorola has seen the percentage of future phone buyers increase from a lowly 4% in August 2009 to 15% in August 2010. The biggest gain (7 percentage points) occurred when the original DROID launched in November 2009. While Motorola spiked, HTC has shown a steady climb of 11 percentage points over the past nine months.

Typically considered a tech enthusiast platform, it is interesting to see Android gaining market share in the business world. Google must be pleased to see its mobile OS is making inroads in a Microsoft-dominated business environemet, especially as it makes a play for enterprise customers with its Google Apps platform. Once a business is hooked on Android handsets, it makes it a lot easier to convince them to abandon Microsoft and adopt Google for its corporate infrastructure.

The rumors of a Facebook phone spread like wildfire this week and the CEO of the world's largest social network...