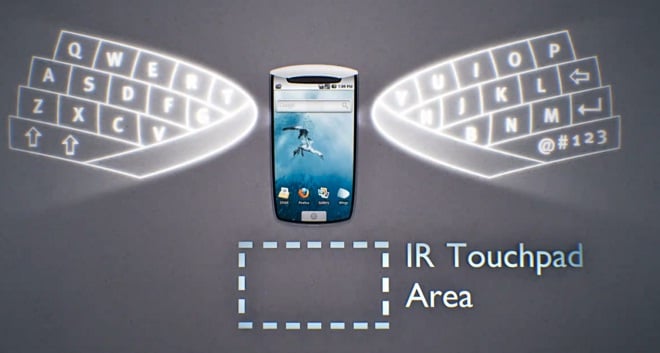 Mozilla is showing off a mockup of a concept phone it has pieced together with the help of the community and I think the Mozilla Seabird looks really, really cool.

Physically, the device isn’t too different from what’s currently on the market – there’s a large touchscreen, sleek body design and an 8-megapixel camera. It does step it up a notch by including dual pico projectors to enable users to project what’s on their device to a larger screen or wall.

What’s really interesting about the Mozilla Seabird is that it aims to tackle the problem of interacting with these devices. Devices like the Apple iPhone 4 have done a good job of bringing touchscreen to the masses but there are still times when this may not be the right approach.

The Mozilla Seabird envisions an embedded Bluetooth dongle with could be used as a form of a 3D mouse. I’d imagine you would also be able to use this dongle as a Bluetooth headset and we’ve already seen this type of form factor with the LG Decoy.

As for typing, things like Swype have made it easier to bang out messages on the go but the fundamental problem with touchscreen keyboards is that these obscure part of the screen. The Mozilla Seabird envisions users being able to lay their device on a surface and have an IR touchpad area and a projected virtual keyboard.

That last part looks cool in videos but I have to question its practical nature. Generally, when I’m typing on my smartphone it’s because I’m on the go and don’t want to have to lay it down on a surface. This could be a cool added feature to a traditional on-screen keyboard, though.

The Mozilla Seabird could also dock for a more desktop computer feeling. Remember, this is all super concept and Mozilla would probably never build a phone itself but these ideas could eventually find its ways to mass-market phones.

Poll: How Do You Feel About Tiered Pricing? Is it Fair?

Verizon announced today that it was going to adopt tiered pricing plans within the next four to six months. Earlier...