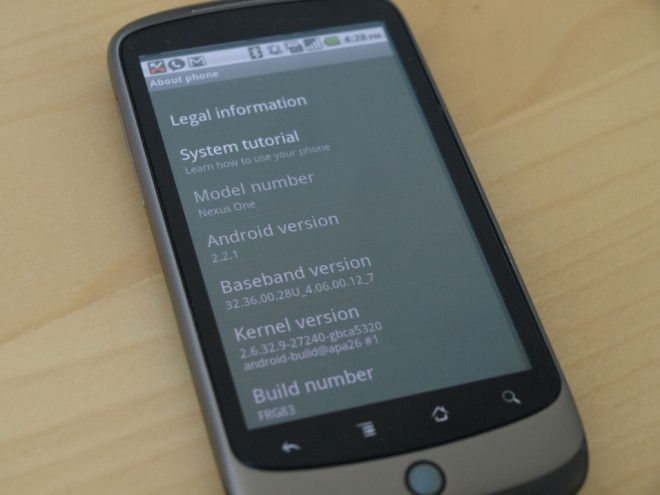 Last night I was playing around with a Nexus One when I saw that there was an OTA update available for it. The update, FRG83, looks to have an updated set of Google Applications, but there’s not much else that’s noticeable.

Those of you with rooted Nexus Ones may want to hold off before updating to this new build, as your root will be taken away. Also, the exploit that allows one-click rooting of the Nexus One has been patched, so don’t think you can just re-root the device with a simple click of a mouse button after this update. It likely won’t take long for a developer to fix add this small update into a ROM, ensuring you can keep your root intact. That’s if it hasn’t been done already. The OTA has been reported to have issues with some third-party keyboards, Swype being one of them. So if you are experiencing issues, it’s suggested you uninstall and reinstall the keyboard after you’ve updated.

Let’s hope that this will be the last Froyo update for the phone before it gets some Gingerbread treatment. Only now is the Nexus One starting to look like an older device, especially with phones like the Desire HD on their way. Even considering its age, the Nexus One is still one of my favorite Android phones to date and there’s very little I wish improved. Well, a physical keyboard would be nice.

If you have yet to receive the OTA and you’re not rooted, you can just go to Settings>About Phone, and select System Updates to see if you can pull it your way. If it’s still not available for your handset, you can just manually install it here.

1. Download the Android 2.2.1 firmware for the Nexus One Here
2. Rename the file update.zip and copy it to your microSD card via USB. [Note: make sure the file is named update.zip and not update.zip.zip.]
3. Power down your Nexus One
4. Hold down the “Volume Down” button as you power the phone back on.
5. A screen should appear showing your phone’s system searching for various files. Scroll down to “recovery” and press the “Power” button.
6. When you see the triangle with an exclamation point symbol, press the “Power” and “Volume Up” buttons at the same time.
7. From the menu that appears, select “Apply sdcard:update.zip.”
8. When the screen displays “Install from sdcard complete” select “reboot system now” and wait for the phone to power back up. (this will take a long time)

That’s it. Enjoy the Android 2.2.1 update on your Nexus One!

It's not really much of a surprise but Sony Ericsson said it is not working on any more Symbian devices...