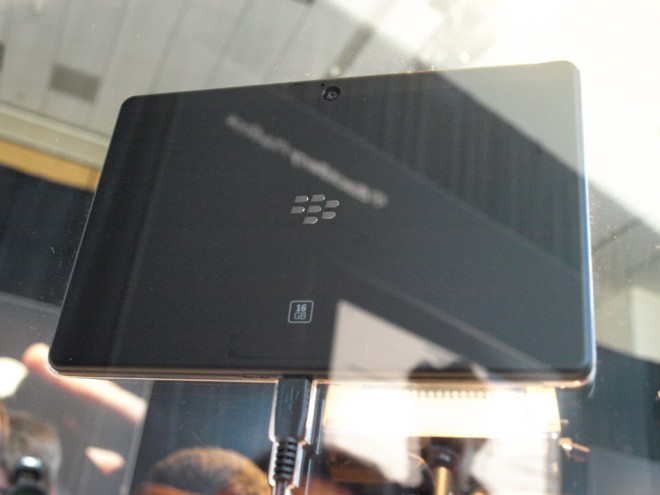 RIM just announced their BlackBerry PlayBook tablet device, powered by the QNX operating system that the BlackBerry maker recently acquired, at the BlackBerry DevCon 2010 opening keynote in San Francisco. A bunch of RIM higher-ups took to the stage to talk about all kinds of developer-focused services and tools, but the highlight of the 2.5 hour keynote was the unveiling of the long-awaiting BlackBerry branded tablet device. Previously and often rumored to be called the BlackBerry “BlackPad” tablet is as slim as they come, as sleek looking as they’ve ever been designed. So, naturally, being in San Francisco proper, we just had to stop by BBDC 2010 and see what all the fuss was about. Unfortunately, the PlayBook was sandwiched between two layers of acrylic plastic that seemed to reflect every single light source in the room.

So, we couldn’t exactly put our hands on the PlayBook, but we certainly got to put eyes on the new BlackBerry tablet. From what we could see, it’s one impressive piece of hardware. We can’t really say anything about the build quality, the material quality, the fit/finish of the device, but it does look sexy. At just 9.7mm thick and 7-inches in the diagonal, the QNX-powered tablet is nice looking slab of glass. It’ll play 1080p video on its 1024 x 600 resolution display, powered by a dual-core 1GHz processor and backed up by a heaping serving of RAM (1GB, to be exact). It’s also sporting both front- and rear-facing cameras — 3MP and 5MP, respectively — just for good measure. You have your choice of either 16GB or 32GB of onboard storage to store all your media. And, with an HDMI port, you can simply hook up your PlayBook to the big-screen TV or the projector in the meeting room and start your presentation right away. What’s strange is that there is no removable battery. On a BlackBerry device. That’s a first.

But, we still have no idea how well the QNX UI works in real-world usage. Sure, the demo video of the PlayBook was a mouth-watering clip of fancy menu animations and finger-friendly swipes, but so was the original BlackBerry Storm demo video. And we all know how “good” the Storm turned out to be. Without putting our hands on the actual device, we can say that the UI looks interesting and is compelling enough for us to hunt down a tablet to fiddle with right quick. The hardware looks amazing, but again, we have no idea how it feels.

That said, enjoy the “eyes-on” gallery and video.

RIM Takes on a New Operating System – What Will QNX on the PlayBook Mean for BlackBerry OS?

We've been waiting on a BlackBerry tablet amidst a wash of vague rumours for the last few months, and it...