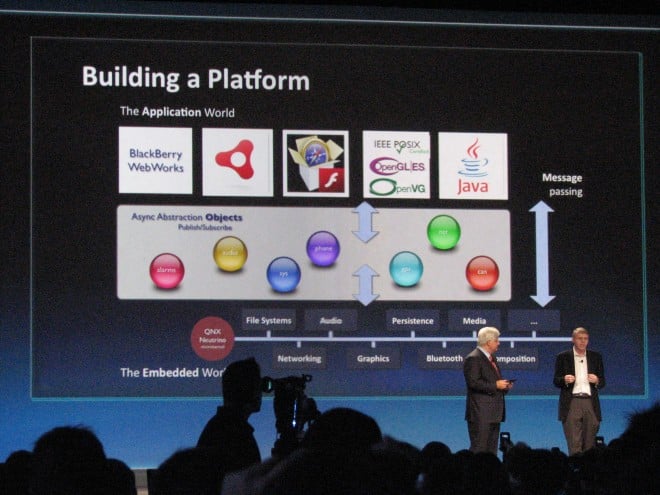 We’ve been waiting on a BlackBerry tablet amidst a wash of vague rumours for the last few months, and it all went official at the Developer Conference today. As speculated, the BlackBerry PlayBook is running a new operating system made by QNX, complete with Flash 10.1 support, the WebKit browser, multitasking, and more.

So, what does the new BlackBerry tablet and its OS offer that the handheld OS doesn’t? And what about fragmentation? Developing for BlackBerry can already be a big enough of a problem dealing with different screen sizes, let alone entirely new SDKs. Looking at the promo video, you can see plenty of similarities with the BlackBerry 6 user interface, and many of the same functions.

One of the biggest potential roadblocks to the PlayBook is integrating with the BlackBerry Enterprise Server, where RIM’s hefty installed base sits, and the the doorway to the enterprise market RIM wants to continue to address; luckily, RIM says the PlayBook is ready for business, and already plays nice with BES.

What about app developers? Will they want to make apps for a new tablet? The nice thing about the PlayBook is that it introduces some monster hardware (dual-core 1 GHz processor, 1 GB of RAM, though little has been said about the resolution), and a large-screen form factor that unlocks many new possibilities for BlackBerry devs who had traditionally worked within tight hardware limitations. 3D graphics are a particularly good example of this situation – the PlayBook supports OpenGL ES 2.0, which is a must-have for any serious game developer. New possibilities alone may pull developers, but if they’re still primarily interested in working on BlackBerry smartphones, the QNX OS will play nice with the recently-updated WebWorks platform, meaning devs could write once and compile twice; even any development done with the Adobe tools (including Air support) announced at the last BBDC can be carried over to the PlayBook.

Tools aside, the core of the QNX operating system seems well-positioned to appeal to developers. QNX has been working in an open-source environment for years, and with RIM’s move to open-source WebWorks, it promises to be a broad, new direction for their developer strategy. One of the biggest complaints from BlackBerry developers is access to APIs,  which would be quickly addressed with open source being available to the OS.

So far, everything is sunshine and lollipops with the PlayBook, but the sneaky caveats won’t become apparent until the device hits the market and developers take an earnest shot at making some apps for it. Despite waiting for the other shoe to drop, it’s hard at this point to imagine why QNX’s operating system wouldn’t simply replace the established BlackBerry OS in time. What do you guys think?

According to a recent press release, Samsung has chosen the Atmel MaXTouch touchscreen technology for its upcoming Android tablet, the...