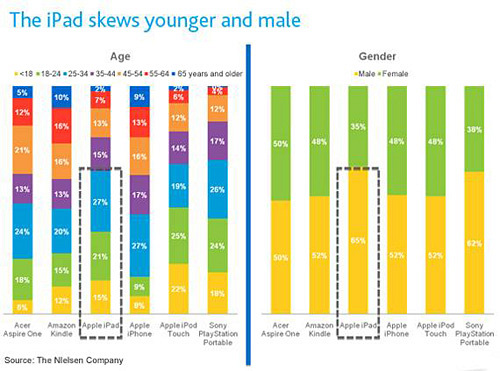 It’s time for another Nielsen study, and this one takes a quick look at iPad owners. Apparently, of the 400 Apple tablet owners in this survey, 65 percent were male. Compared to Sony PSP and Amazon Kindle owners, who were 62 percent and 52 percent male, respectively, it’s a pretty large bias for the iPad. What’s more interesting, however, is that Kindle owners surveyed were better educated than the iPad owners.

iPad owners also tend to be younger than Kindle owners as rule, with some 63 percent falling under the age of 35 versus the Kindle’s 47 percent. Kindle buyers tend to be wealthier, however, as 44 percent make more than $80,000 a year next to the iPad group’s 39 percent. Kindle owners are further described as better educated, since 27 percent of them have Master’s or PhD diplomas.

What’s a little surprising here is the average income of Kindle owners versus iPad owners. One would imagine that more iPad owners would be a bit more affluent given the cost of the device, which is a luxury item. But if there is even the slightest bit of correlation to education and income, then perhaps it isn’t all that surprising that the higher educated Kindle group earns more than the iPad owners.

Furthermore, it seems that the younger, male iPad owners are also more susceptible to advertising. The overall study showed that 19 percent of respondents thought that ads were interesting, but 39 percent of iPad owners responded similarly. Of course, maybe ads just looked better on the Apple tablet.

Apple relaxed its application submission guidelines for its app store and everything has gone wild west on us. Previously rejected apps are...