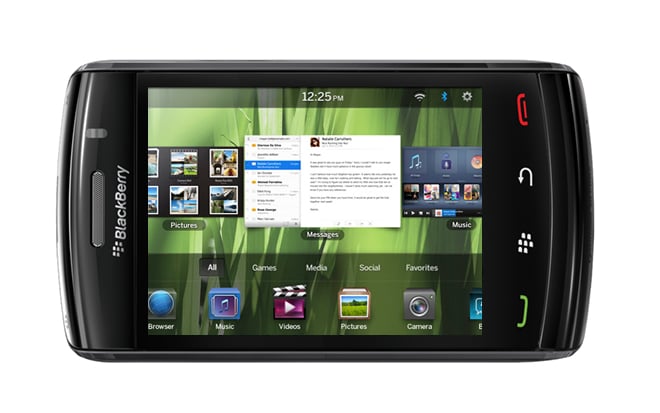 Yesterday we had heard from one RIM VP that BlackBerry smartphones would, in the long haul, be loaded up with the QNX operating system running on their recently-announced PlayBook tablet. Though that one source hardly locked down the possibility of such a switch, some fellow bloggers have prodded VPs on the matter and yielded comments that mostly confirm our suspicions. Alan Brenner, BlackBerry Platform VP, said “there’s no reason to rule it out,” and Alan Panezic, RIM’s VP of Platform Product Management said the switch would be a “logical conclusion.” Although ambiguous, these are both pretty affirmative.

The QNX operating system promises to bring stability, low power consumption, and solid multimedia performance to the BlackBerry PlayBook, backed by the beefy dual-core 1 GHz processor and 1 GB of RAM. The tablet form factor is better suited than smartphones to take advantage of the multimedia capabilities of QNX, but there’s really no reason why the company’s longstanding experience with low-power machines couldn’t (or shouldn’t) be brought to bear on RIM’s core smartphone business. After attending a session on the platform here at DevCon, it’s plainly obvious how similarly-aligned priorities lead to RIM acquiring QNX earlier this year.

When the PlayBook is released in early 2011, developers will be able to run old-school BlackBerry apps in QNX in a kind of compatibility mode (think of iPhone apps on an iPad). However, given the added commentary from Brenner and Panezic, it wouldn’t be insane to presume that in time all BlackBerry apps, for tablets, smartphones, and otherwise, will be built for the same core operating system. Such a transition will have plenty of hurdles in and of itself, but you can read more about those over here.

From what we’ve seen of the UI, the QNX OS will probably look a lot like BlackBerry 6 if it eventually wriggles its way to handhelds, even though it might behave a little bit differently behind the scenes. Personally, I’m looking forward to it since QNX really is the BlackBerry OS rewrite many have been asking for. What do you guys think – will QNX usher in a new golden age for BlackBerry and give them the fighting juice they need to compete with Android and iPhone?

An overlooked announcement here at DevCon was the release of BlackBerry Theme Studio 6, screenshots of which had leaked a...