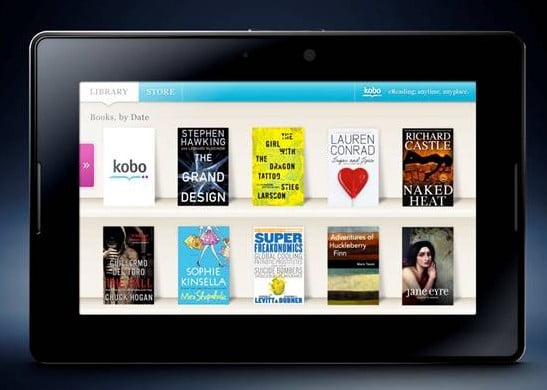 The BlackBerry PlayBook tablet couldn’t very well compete with the iPad without something to match iBooks, right? RIM has partnered up with Kobo to provide an electronic novel marketplace for the PlayBook out of the box when it launches early next year. Kobo offers a library of some 2 million-odd titles, ranging in price from free to $20 and up (it seems like most prices are on the higher end, as far as  e-books go). Those titles will be optimally read in a tablet form factor, however Kobo also had some handheld news on top of the PlayBook preload deal.

Sometime early next year (likely in tandem with the PlayBook launch) Kobo’s standard BlackBerry app will take advantage of the BBM Social capabilities announced at DevCon, which will allow readers to connect with friends who are reading the same books on Kobo as they are, and share select passages, whole books, or your whole library with them. As neat as this idea is, I’m not sure I would want to be in a book club 24 hours a day (although I’m sure there are some people out there who would).

In the larger scheme of tablets and e-books, both Kobo and the PlayBook have some steep competition, especially from the likes of Amazon who have their own tailored e-reading hardware, and broad-spanning applications. However, Kobo is in an advantageous position in that they’re not only first on the BlackBerry PlayBook, they will also be preloaded on the Samsung Galaxy Tab, which will be the first proper Android tablet to hit the masses.

Here’s a short video of the BlackBerry app in action, but you’ll probably have to wait awhile longer before seeing the PlayBook one. If you’re interested in giving Kobo’s mobile e-book reader app a shot as is, here are links to the wide variety of platforms they support.

BlackBerry VPs Chime in on PlayBook QNX OS on Phones

Yesterday we had heard from one RIM VP that BlackBerry smartphones would, in the long haul, be loaded up with...