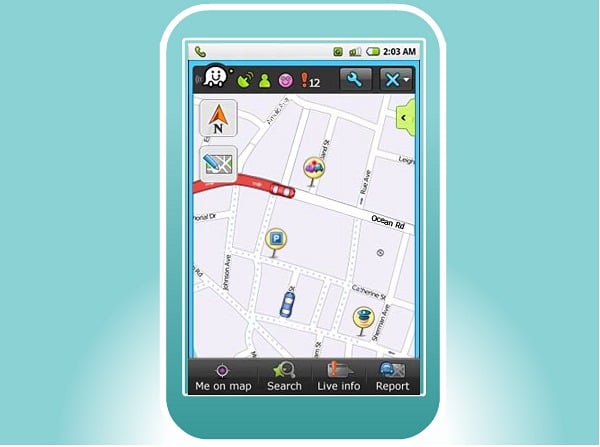 Waze is a service that might do you a lot of good if you’re fighting traffic every time you commute. Perhaps the best part is that you really don’t have to do anything. If you’re unfamiliar with Waze, it’s a free app for Android or the iPhone, and it uses GPS to track your commute. If you slow down or stop, or do anything indicating traffic, it’ll show up on the map where you are for others to see. And when your car isn’t in motion, you can report or take pictures of traffic, road hazards or construction going on.

Waze has now launched Custom groups, which allows for “citizen traffic reporters” (whether you think that’s good or bad) and the first two groups to jump on board are NBC-2 and The Statesman newspaper. The hope is that many more will climb on board because the more data Waze gets on the road, the better the service will be. By joining a “custom group,” Waze users can track other Waze users who are in the same group, with the option to interact with them via Twitter or Facebook.

Imagine being able to get real-time traffic information to prepare for your morning or post-word commute. Normally, you’d rely on some reporter in a helicopter showing you how congested the freeway is at the moment. But, with Waze’s new driving groups, users can sign up for groups that will help promote the app and create ever larger groups of users. The end result is that you get real-time traffic reports on highways and byways. As long as there are enough people using the app, Waze will tell you what traffic flow looks like on your freeway, the nearest major street, and possibly even the street you live on (again, that depends on how many people use Waze). That’s cool.

Waze today extends the feature with Custom Groups for media companies, retailers, car companies, etc. which allows icons to be custom-branded and easily identified on a map for other members of that group.

So if you’re looking for the best real time GPS/traffic service, and Google Maps, TeleNav, Verizon Navigator, Sprint Navigation or AT&T Navigation just doesn’t cut it for you, you might want to check out Waze. It is free, after all.

If the iPhone 4 is at the top of the list, but the price tag is simply too much for...