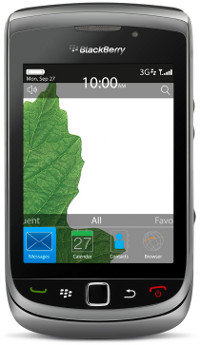 After pushing back initial September 24 launch dates, both Bell and Telus have released the BlackBerry Torch 9800, going for $179 at Bell, and $199 at Telus on contract.  Why the price difference? Who knows. Rogers also got all official-like with the Torch today, but they had gone live with it in the online store earlier this week.

If you haven’t had a chance to check it out, the BlackBerry Torch 9800 is RIM’s top-notch phone, running a newly revamped operating system with universal search and visual upgrades. It’s also their first slider, which is a great form factor that takes the best from both touchscreen slate and QWERTY candybar worlds. Specs-wise, the BlackBerry 9800 is middle-of-the-road in the grand scheme of smartphones: 512 MB of RAM, 624 MHz processor, 3.2″ HVGA capacitive touchscreen (no SurePress), and a 5 megapixel camera with autofocus and flash.

The Torch has been sitting pretty on AT&T for a little over a month now, and the initial sales have been less than great. With no carrier exclusivity in Canada, the 9800 may enjoy a better proportional spread up north, but it’s such a smaller market than the U.S. that it probably won’t boost RIM’s overall sales much.

If you’re interested in picking up the Telus Torch, it’s in their online store here, or you can nab the cheaper one at Bell here, or Rogers here. If you’re still on the fence, be sure to take a look at our review of the BlackBerry Torch 9800.