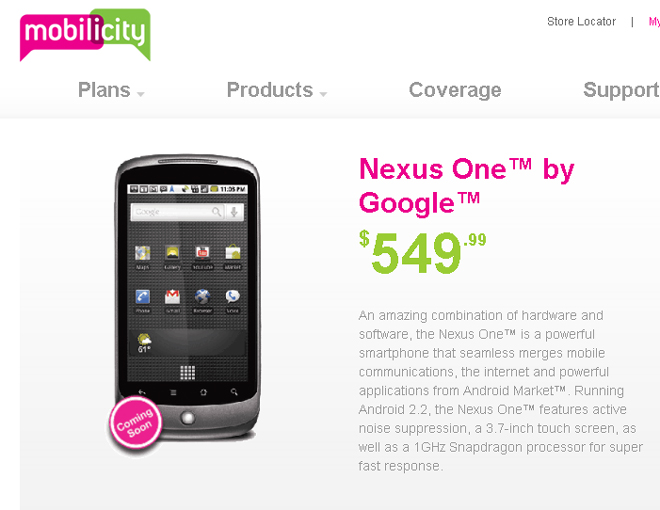 Prepaid Canadian carrier Mobilicity is joining Videotron in offering the HTC Nexus One, running Android 2.2, with the key difference being Mobilicity is offering the device to Toronto rather than Quebec, and the Videotron model is significantly cheaper ($489 versus $549). The downside, of course, is that Mobilicity doesn’t offer a subsidized $99 version like Videotron does.

The Nexus One, though starting to show its age with the likes of the Droid X in the U.S., is still a respectable smartphone: 1 GHz processor, 512 MB of RAM, 3.7″ WVGA capacitive touchscreen, Android 2.1, 5 megapixel camera with autofocus and flash, and the usual GPS, Wi-Fi, and 3G. Telus is currently offering the HTC Desire, which is little more than the Nexus One with Sense customizations thrown on top, but for those who prefer the clean vanilla experience and comparative early access to new OSes as they come out, the Nexus One is a great choice. Being limited by the Toronto network is a bit of a shame, but Mobilicity plans to spread out to Vancouver, Calgary, Edmonton, and Ottawa in the future.

There’s no word on a release date, but you can check out Mobilicity’s Coming Soon page over here, or take a look at our hands-on experiences if you’re about to take the leap.

Motorola has been on an obscure design rampage since the Backflip, continuing that tradition with the Flipout, and now with...