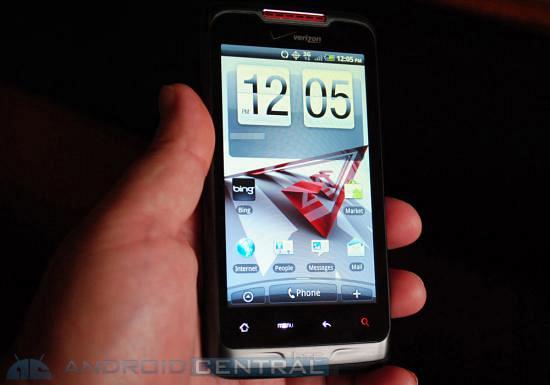 HTC’s latest hasn’t even been officially announced, but the Merge (or Lexikon) already been pictured and put through a review. The device is also a nice little reminder of where HTC is headed in terms of design and style – very sleek with metal accents and backing. It appears to be well-built, typical of the manufacturer, with a solid keyboard all on top of Android 2.2 or Froyo.

The HTC Merge, codenamed Lexikon, is a Verizon Android handset that also has a SIM card slot for global network capabilities. It also features an 800MHz processor, which many have scoffed at when the Snapdragon chipset was announced for the T-Mobile G2, but it has proven to be a very capable chipset as we’ve seen in initial impressions of the Android device.

However, given that the Merge reviewed is a pre-production unit, or at least we’re going to assume so since the Lexikon hasn’t been made official by HTC or Verizon yet, AndroidCentral has this to say:

The Android System Info app lists max processor speed at 800MHz, so that’s what we’re going with here. Max internal memory was listed at about 1.3GB, and there were about 363MB of RAM available to the user. (That’s you.) Benchmark tests list the Linpack score at about the same as the Nexus One, and Quadrant has it above the Nexus One with Android 2.2.

Oops. That’s not a whole lot of internal memory or RAM for an Android handset! But we’re sure that will officially change.

But that’s not all, and get ready for this one: Bing is apparently the default search option and map for the smartphone. AndroidCentral does not, however, that you can still download Google Maps from the Android Market. Whew.

Oh well, this Merge or Lexikon will get rooted by Android hackers in no time and all the Bing/Microsoft haters can take care of that default search/map issue in no time. In the meantime, enjoy the HTC Merge/Lexikon benchmark video below.

If your Android phone uses the regular stock on-screen keyboard, you may have some complaints on its usability. It's a...