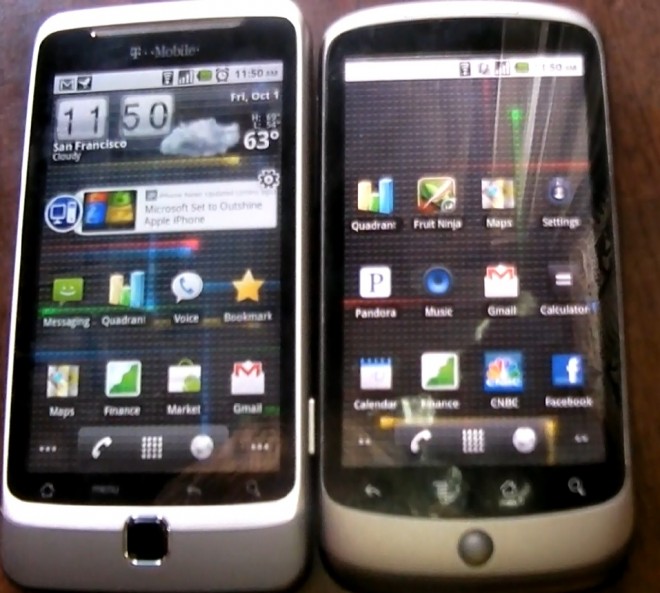 We listened to your tweets, and we now have a quick comparison video between the new T-Mobile G2 and the Google Nexus One. The G2 is the only other decent Android phone on the market to ship with stock Android, so those who have longed for a keyboard on their Nexus One, this video is for you.

The major difference between the two devices is obviously the G2’s QWERTY keyboard that takes advantage of HTC’s new “Z hinge” mechanism. The keyboard on the G2 is a dream to type on, but we’re still questioning if we like the hinge on the thing. The Nexus One has to make do with Android’s virtual keyboard, which isn’t exactly the best experience for long-form typers. Thankfully there are alternatives you can take advantage of, and Google’s recent acquisition of BlindType may make this a non-issue in future Android versions. We can only hope. Since the G2 does have a physical keyboard, expect this thing to be a bit thicker, and much heavier at that.

Both devices are running Froyo, with the Nexus One on Android 2.2.1 and the G2 on Android 2.2. There’s very little difference between the two versions, and you likely won’t notice any difference. That said, the biggest difference you will notice on the G2 is that it is pre-loaded with many more Google applications than you’d find on the Nexus One. Some might consider this just an increase in bloatware, but at least they aren’t carrier-specific apps. I don’t really mind the extra apps, but I will probably remove them as soon as the G2 gets a decent root method going on.

As far as hardware goes, both share similar design aesthetics. Both have uni-body metal frames, with the G2 obviously being much larger than the Nexus One. Both also share 5 megapixel cameras with a single LED flash, and both have their good and bad moments in imaging. I have yet to really put the G2’s camera through its paces, but you can expect a more in-depth description of the camera in the upcoming review.

One thing that T-Mobile’s new handset does sport that you won’t find on the Nexus One is a dedicated camera button, which may appeal to some, but for me it’s not really a necessity. Another difference you’ll see between the two is that HTC chose to give the G1 successor an optical trackpad rather than the Nexus One’s trackball, both of which use an LED notification light to indicate missed calls and messages. While I still prefer the trackball, the trackpad is very sensitive and I could see it growing on me after a while.

The biggest potential sticking point with the G2 is that it sports a 800MHz Qualcomm chipset where the Nexus One comes with a 1GHz CPU. But, we have to say that clock speed doesn’t seem to mean much in this comparison, seeing as how the G2 uses a new-generation Snapdragon processor whereas the N1 is stuck on the older silicon. Why don’t you check it out in the video below and see for yourselves!

HTC Merge (Lexikon) for Verizon Gets Fondled and Reviewed

HTC's latest hasn't even been officially announced, but the Merge (or Lexikon) already been pictured and put through a review....