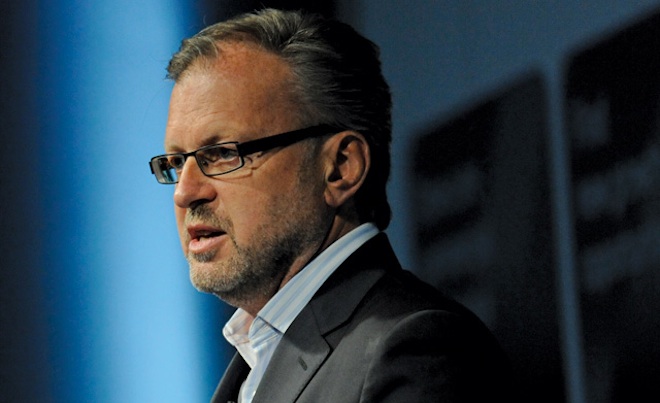 Everything Everywhere, the name of the merged entity that’s one part T-Mobile UK and another part Orange UK, has announced that they’re going to let go around 1,200 people or roughly 7.5% of the company. Many of the people getting the boot had consumer facing roles, so you can imagine it’s all the redundant dead weight that is getting trimmed off. Tom Alexander, CEO of Everything Everywhere, pictured above, says his job is to make sure that his network is “operating with maximum efficiency”. That’s a bit of an ironic statement since the two operators merged over a year ago, then took 6 months to come up with a new brand name, which by the way is not even a consumer facing brand name since Orange shops and T-Mobile shops have retained their brands, and worst of all it’s taken until the end of this year for consumers on either Orange or T-Mobile to be able to roam on the other’s respective network.

This is a case of two large animals fighting over a female by ramming their heads into each other, both getting brain damage, both potentially dying due to excessive internal bleeding. With a combined 30 million customers, Everything Everywhere is one of the biggest operators in the UK, right behind Vodafone, but if they can barely pull off a name change, what confidence does that instill in others when talking about upgrading networks to support the upcoming LTE or HSPA+ standards?

In a recent survey it was “3” who was voted the best operator in the nation, offering a good mix of network coverage, customer service, download speeds, and pricing plans. Try them out, they’re the underdog. And as always, stay away from devices that have heavy operator customizations, instead opting to pay a little bit more for an unlocked unit that hasn’t been tinkered with. Orange has a habit of ruining devices.

T-Mobile is rapidly expanding its new 4G revealing high speed HSPA+ data network to more and more US cities as...