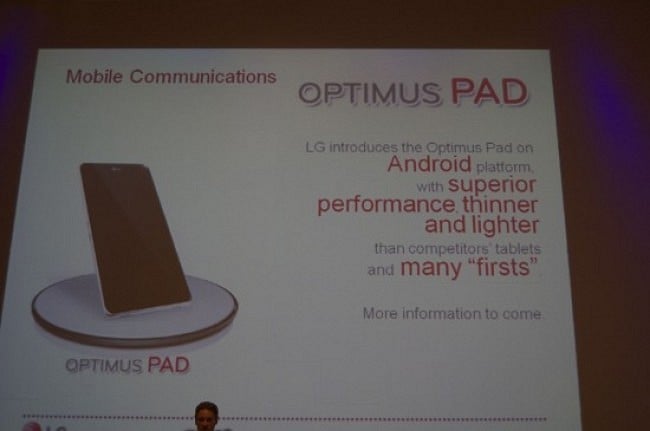 The tablet wars might have begun, but LG is not going to be taking part in it any time soon. The Korean manufacturer has decided to hold off on building an Android tablet because of Android’s lack of optimization for the tablet form factor. It has already been mentioned by Google that Android 2.2, or Froyo and the latest available version of the OS, is not tablet-ready.

Instead of rushing a product to market like Samsung has with a platform that really wasn’t meant for use on big-screen devices, LG is trying to work with Google on making a more tablet-friendly version of Android.

“We plan to introduce a tablet that runs on the most reliable Android version … We are in talks with Google to decide on the most suitable version for our tablet and that is not Froyo 2.2,” said an LG official.

The official declined to be named, saying LG had yet to decide on the timing for its tablet launch.

This setback could further put LG behind in the market as the iPad gains momentum, the Samsung Galaxy Tab is launched on all four carriers by the holidays and the BlackBerry PlayBook possibly arriving shortly thereafter.

LG has been lagging in the smartphone department, and this setback – although probably a smart move – could make things even more difficult for the manufacturer. There is a chance that Windows Phone 7 and its new Optimus line could put it back on the map, but I wouldn’t put too much stock in that.

My bigger curiosity now is what Google with come up with in conjunction with LG to make Android a more pleasant experience for tablets. Clearly, both the manufacturer and Google itself feel that the current iteration of the software isn’t ideal for screens bigger than those found on current smartphones like the HTC EVO 4G or Motorola Droid X. It will be exciting to see what they come up with.