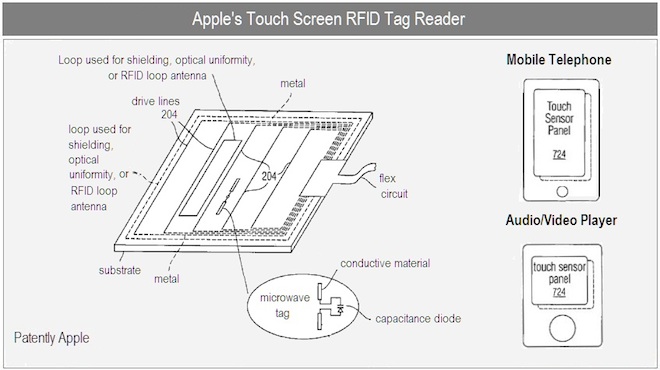 Apple has been filing RFID patents like no tomorrow, making us think that they’re going to be one of the first handset manufacturers to shove the technology into millions of devices, ranging from the iPhone, iPod touch, iPod nano and the iPad. Curiously, one of their new patents discusses how the RFID sensor can be built into the actual screen. Added benefits are obvious, from making the antenna larger, to saving space on the PCB, to enabling even thinner hardware. Like any patents, it’s not immediately obvious when, if ever, Apple is going to put this sort of technology into their products, but with Mobile World Congress coming up in less than half a year, and Qualcomm suggesting that dual core Snapdragon chipsets are going to be in devices shipping by the end of this year, we’re left pondering what Apple has up their sleeve next summer when they announce iPhone 5.

RFID, for the uninitiated, is a technology that makes near field communication possible. Instead of having to enter a string of digits to pair a device, or worse yet type our a pass phrase to connect to a WiFi network, with RFID all you do is tap a surface and boom, connection initiated. This type of technology is already widely deployed in Japan where the locals are using their mobile phones to do things such as pay for groceries, unlock their front doors, redeem coupons and loyalty points at the stores they frequent, and to exchange contact information.

The GSMA, the folks who invented the GSM standard that powers an untold billion number of devices, recently backed a technology called Single Wire Protocol that ensures there’s a connection between a user’s SIM card and the RFID sensor inside the device. This is done for authentication reasons. With Apple and their iTunes ecosystem however, do they even need to conform to industry specifications? Time will tell.

Hands-on with the Motorola Droid Pro for Verizon [HD video]

Motorola made a big splash on the evening before CTIA by introducing five Android handsets. Of those, the one that...