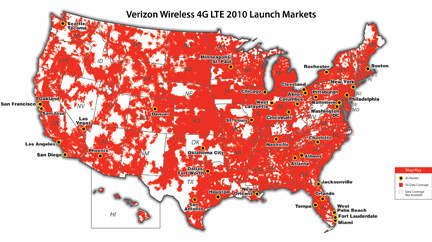 Verizon Wireless took some time at CTIA SF 2010 to talk about their upcoming 4G LTE mobile broadband data network in the US. Following on the beans that the carrier spilled during the CTIA opening keynote this morning, Big Red held a press conference to give us a rundown of which US cities and airports will be going live with LTE by the end of this year.

Verizon has plans to go big with LTE. By the end of 2010, Big Red says it will have blanketed over 110 million US residents with high-speed data service. That includes 38 major US cities and 59 airports – Los Angeles, San Francisco, New York City are on the list, as are the cities’ biggest international airports (LAX, SFO, JFK). The new network will cover over 200 million people by 2012 and will cover more than 285 million people by the end of 2013.

The first devices will hit market in 2010, and they’ll be USB modems and the like. McAdam said that we’ll see tablets, machine-to-machine and other devices at CES 2011, and will be ready for launch in the first half of 2011. The initial slew of 4G-capable handsets will be hybrid 3G/4G devices, in order to accommodate voice. Because the LTE network will initially be limited in its coverage, Verizon will rely on its CDMA network for voice services – LTE will not support voice and data simultaneously until later in the ecosystem’s rollout.

Pricing for data plans will be released later on. But, one promising tidbit to come out of the press conference was McAdam’s confirmation that Verizon is considering an unlimited data plan.

The carrier says it is seeing real-world data speeds of 8-12 Mbps on downloads, and expects uploads speeds between 2 and 5 Mbps, which is faster than many people’s wired home broadband connections. Verizon COO and President Lowell McAdam said that the carrier is seeing 4G network latency that’s half of what we’re used to on the 3G network. “This is something that we’ve talked and dreamed about for 20 years,” said McAdam.

Hit up the next page for a full rundown of the US metro areas and airports that Verizon will light up with 4G LTE service later this year. Is your city on the list? If so, consider yourself lucky! The rest of you will have to wait until the end of 2011. Here’s to hoping that Verizon meets their launch goals.