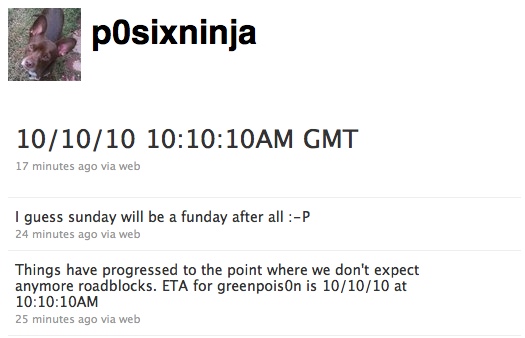 Good news for iOS owners as the Chronic Dev Team is close to releasing its SHAtter-based greenpois0n jailbreak for iOS devices. A series of tweets suggests the tool is ready to roll and points to an availability date of 10/10/10 at 10:10:10 AM GMT. The update will most likely debut on the greenpois0n website which can be found here. Right now the greenpois0n website is a placeholder and all the action is happening on the Chronic Dev Team’s twitter page.

The greenpois0n jailbreak is exciting as it promises a lifetime jailbreak for Apple’s latest generation devices including the iPhone 4, iPod touch 4G and iPad. Though some may be disappointed, this tool will not work with the iPhone 3GS, the 3G, and the iPod touch 3G. The word comes straight from the Chronic Dev Team,

“greenpois0n supports: The iPad, the iPhone 4, and the iPod touch 4. Probably the AppleTV as well.”

Astute readers will notice the qualifier at the end that points to the Apple TV. Additional tweets from team members confirm that this exploit will also work with the Apple TV and work is underway to add support for this streaming media device. The screenshot below, courtesy of Will Strafach (@willstraf), gives us a glimpse of what is to come.

Additional information suggests greenpois0n will be an untethered jailbreak and will hacktivate the iPhone 4 running iOS 4.1, allowing the handset to bypass iTunes activation and run post-jailbreaking without a SIM. Thanks to the US government, all this jailbreaking action is now legal in the US. Yay! No more jailbreaking in fear wondering if a band of men in jeans and black turtlenecks are waiting around the corner, ready to confiscate your iPhone.

Stealing the words of Joshua Hill (@p0sixninja), Sunday is indeed going to be a fun day. Anyone with an iPhone 4, iPod touch 4G, iPad or Apple TV excited by this news and waiting anxiously for this weekend to arrive?