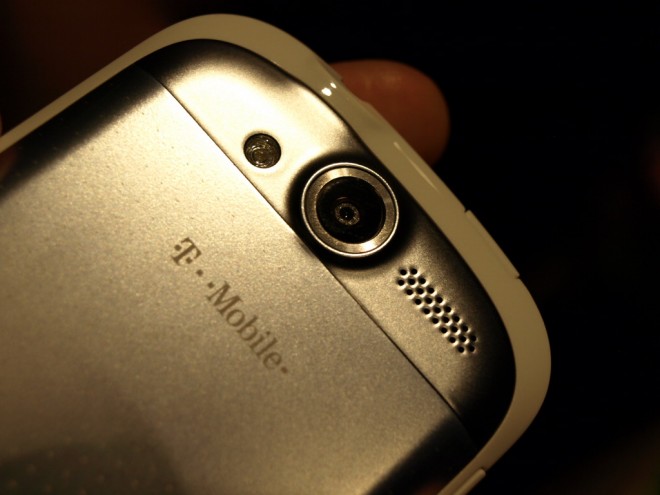 The T-Mobile myTouch is shaping up to be a monster of a superphone and we were able to get some hands-on video with the device.

Well, we got video of the myTouch but we weren’t allowed to turn it on. While that really sucks, I’m sure the software isn’t final yet and the carrier didn’t want you to get a bad impression of the device before it’s released.

In our time with the T-Mobile myTouch, we were impressed with how slick and thin it was. It’s a shame that we couldn’t turn it on because that 3.8-inch display should be a beauty.

That display takes up the majority of the face but there are also four hard buttons and an optical trackpad. Like the myTouch Slide, this device will have the T-Mobile Genius button, which can do multiple voice-enabled searches and actions.

You can also notice a front-facing camera of the myTouch and this will be capable of “Video Chat” over WiFi or over T-Mobile’s 3G network. There’s no word on if third-parties like Skype will get 3G video calling but we’ll find out soon enough.

As for the hardware itself, the back has a nice metallic finish. It may be easy to confuse this for a rebranded HTC Desire HD but the T-Mobile myTouch is its own beast.

There’s a side-charging port, which indicates that we could see a docking cradle with the introduction of the Android superphone. It’s a good weight too – it’s a tad bit lighter than the EVO 4G but it feels solid in your hands.

The T-Mobile myTouch is going to be a killer smartphone for the holiday season. Beyond its physical beauty, it comes with the second-generation Snapdragon processor, Android 2.2, a 5-megapixel camera capable of HD video, WiFi calling and it will have access to the carrier’s HSPA+ 3G network.

Check out the video below and just try and hold back your excitement.

We were the first to break news that the LG Optimus T was hitting T-Mobile and we were able to...