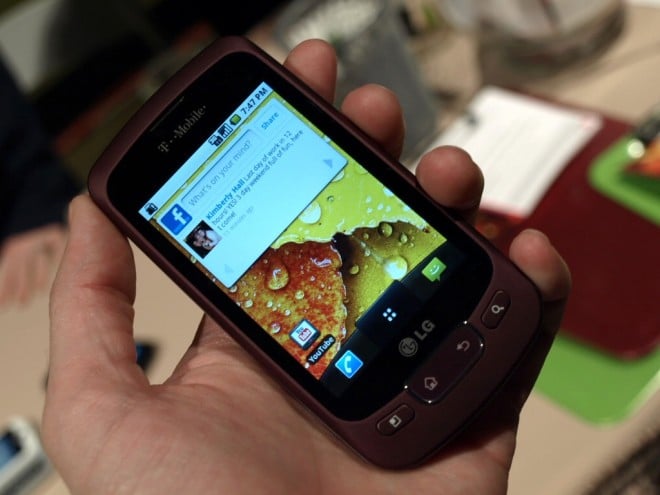 We were the first to break news that the LG Optimus T was hitting T-Mobile and we were able to get our hands on the thing during CTIA San Francisco. It’s aimed at first-time smartphone buyers but does that that mean this Android 2.2 phone is not on par with high-end offerings like the G2?

Well, yeah. The Optimus T was a bit larger than other super-slim handsets and lacked the larger touchscreen that we’re used to nowadays. The soft-touch finish does lend the LG Optimus T a bit of high-end feel, but it definitely doesn’t feel like a premium device. And, rightly so. The Optimus T is only $50 out the door.

The Optimus T has a 3.2-inch capacitive screen and it was bright and responsive. We’re spoiled with the beautiful screens on the iPhone 4 and the Samsung Galaxy S lineup but a first-time smartphone owner shouldn’t run in to many issues with the display on the Optimus T.

Despite being a lower-end, entry-level device, the Optimus T comes with Android 2.2, so it will have all the features you would expect from this version of the software including improved web browsing. It looked like stock Android to us but don’t be surprised if T-Mobile does a few tweaks when it is released to include preloaded software.

We weren’t huge fans of the LG Ally for Verizon but we did like the custom LG Home layer the company put on top of Android. This provided subtle changes by including custom widgets and it improved the application launcher, which is still kind of weak in the standard version of Google’s mobile OS. LG Home was nowhere to be found on the Optimus T.

The LG smartphone boasts solid, but not great, specs in the categories you care about: a 3.2-megapixel camera (no flash), WiFi, Bluetooth and GPS. It will also have Swype preloaded and I’ve slowly become a big fan of this typing method.

The LG Optimus T is by no means a bad device and it should come in near the $50 price point when all is said and done (not confirmed by T-Mobile though). Check out the video below and let us know what you think.

Glassgate? Slide-on cases breaking the glass back panel of the iPhone 4

First it was Antennagate and now it is Glassgate? A report from gdgt suggests that Apple is dealing with another...