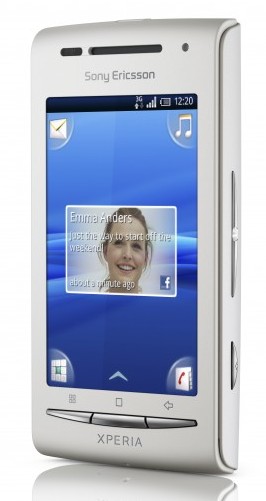 After spending some time at the FCC, the Sony Ericsson X8 is now shipping alongside the eco-friendly Cedar. The two were announced together about four months ago to little fanfare, but maybe they’ll get a bit more lovin’ once they’re actually in stores.  SE is toting the X8 as their most affordable Android phone to date, so that’s got to count for something.

The X8 sits somewhere between the Xperia X10 and the X10 Mini in terms of size, but the software is very similar – Android 1.6 with Sony Ericsson’s custom Timescape social networking app, and a few UI tweaks. Though the Cedar doesn’t run Android, it does use a similar four-corners home screen layout. Hardware-wise, the X8 has GPS, Wi-Fi, 3G, a 3 megapixel camera, and a 3″ touch-sensitive HVGA display, while the Cedar stays modest with a 2 megapixel camera, 3G, and a 2.2″ display.

Since Sony Ericsson has ditched Symbian in favour of Android, we can expect them to continue expanding their Xperia lineup, hopefully running something newer than 1.6 from here on in. The X8 will get 2.1 “later this year”, but likely after the other devices in the family. No mention of which carriers will be picking up either phone, but we’ll probably hear an announcement soon.

The brains behind Android, Mr. Andy Rubin himself, sat down recently to talk about the Google mobile operating system. He...