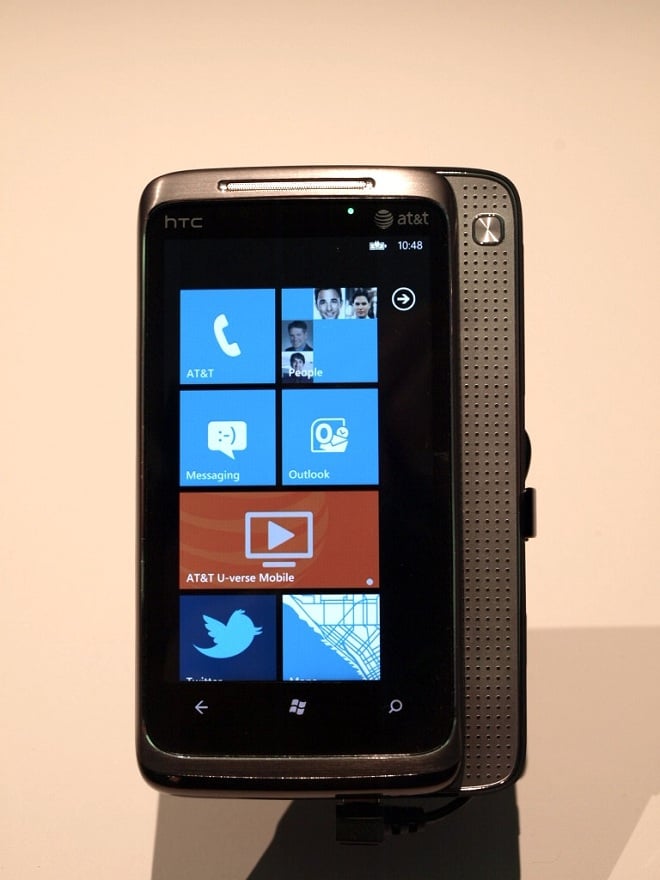 Microsoft and HTC debuted the new HTC Surround at the Microsoft Windows Phone 7 press conference in NYC today, and we got a chance to play with the new music-centric WP7 smartphone. The HTC Surround features a large 3.8-inch WVGA capacitive touchscreen that lies atop a 1GHz first-generation Snapdragon processor and 16GB of onboard storage. It’s also fitted with all the high-end smartphone bells and whistles that we’ve come to expect from this caliber of handset, but the highlight of its feature-set is the slide-out speaker. Slide the display to the left and it reveals a Yamaha speaker panel that blasts music out with Dobly Digital audio processing.

We’re not sure how well the HTC Surround’s “unique” design will be received by the general masses, but for those of you with a serious penchant for listening to music through a smartphone speaker, the Surround is the WP7 handset for you. Underneath the metallic grill lies a set of Yamaha speakers, ready to pump out the tunes in surround sound, thanks to the various Dolby Digital surround sound profiles that are available on the phone. You can cycle through the different surround sound profiles via the little button in the speaker grill (see the button in the pics below).

There’s also 16GB of onboard storage, but no microSD card slot. That means you’ll be limited to storing only 16GB worth of music and videos on the device. But, with Zune Pass integration, you could probably stand to keep most of your music on your desktop and use the Zune Pass music subscription service for all your mobile music listening needs.

Overall, the HTC Surround boasts the high-end build-quality that we associate with HTC smartphones. The slider is smooth and solid, sliding open with a confident “snick.” There isn’t too much travel in the slider mechanism because it only has to slide out far enough to reveal a slim speaker panel. The display is crisp and large (3.8-inch capacitive touchscreen), but we would have been happy to see a larger, 4.3-inch display, a la the HD7. If you’re looking to play music through your WP7 phone’s speakers, the HTC Surround is your best bet. Grab one soon on AT&T for $200 with a new 2-year contract.