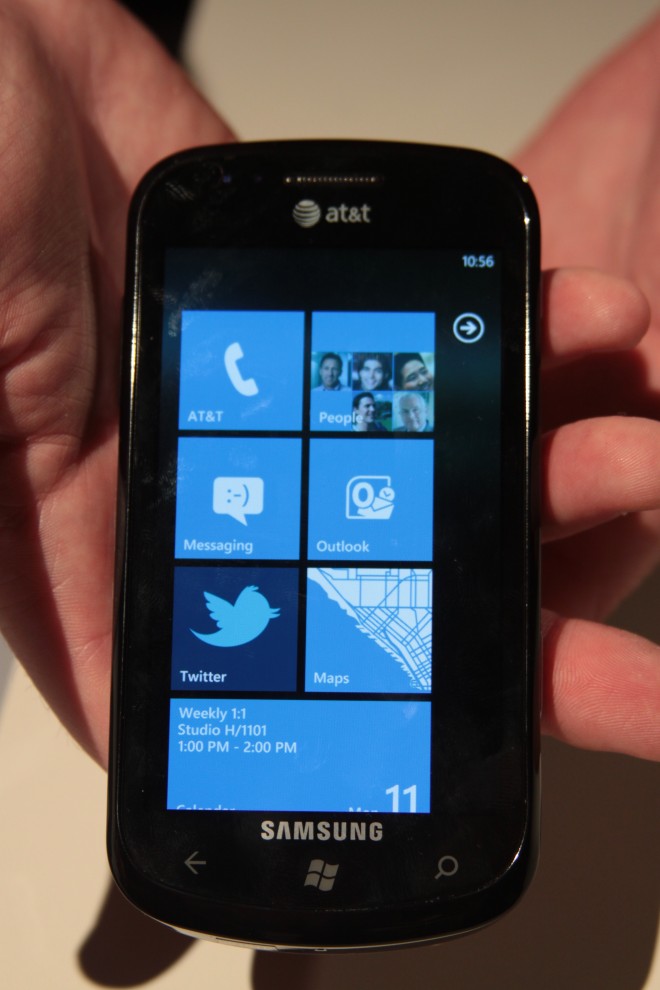 Today we got a good look at Windows Phone 7 and got some hands on time with the new Samsung Focus. This new WP7 handset is heading to AT&T and will be packing a 1GHz processor, 8GB of internal memory (expandable via a microSD slot), a 5MP camera with flash and of course, Samsung’s vivid 4-inch Super AMOLED display, and a microSD card slot that can accommodate up to 32GB microSD cards.

In the hand, the Focus feels incredibly lightweight and thin. As a matter of fact, Microsoft boasted the Samsung Focus as being the thinnest smartphone available on the market at just 9.9mm thin. After handling the other Windows Phone 7 devices, what really stuck out with the Focus is its display. If you’ve had a chance to play with the Samsung Galaxy S series smartphones, you’ll know exactly what I’m talking about. The colors are rich and vivid, and the contrast is deep; it’s even made more dramatic by the colors that Microsoft chose for WP7.

Although the Focus looks very slick and svelte, it does have a plasticky feel like the Vibrant for T-Mobile, and it does smudge very easily in front and back. One thing I would have liked to see on this device is a soft-touch back to prevent all that smudging, but it’s more a matter of personal preference.

However, the Focus felt good in the hand and the screen was extremely responsive — good news for you impatient types, and it’s pretty much what you can expect when you take this thing home from the store. After all, Microsoft told us that this is the final software that will be shipping when these bad boys hit the market.

Being as thin as it is, you’ll have absolutely no problems with tight jeans or just about anything else. But don’t let the thinness fool you: Samsung does make some pretty decent hardware and the Focus is probably my favorite of the AT&T bunch (the others being the LG Quantum and HTC Surround).

One cool thing about the Focus is that it is, as far as we know, one of the only (if not the only) WP7 phone to rock an external memory card solution. Windows Phone 7 doesn’t really make any UI considerations for dealing with external memory cards, so most WP7 devices will lack a microSD card slot. Samsung confirmed to us that the Focus has a microSD card slot but it “marries it to the OS and becomes part o the device’s internal memory.” In other words, the phone “sees” the extra storage as part of its onboard memory – an impressive workaround that might make the Focus the gotta-have Windows Phone 7 device for quite some time!

The Samsung Focus will be available on November 8 at AT&T for $199.99 with a two-year contract. If you’re reading this from the Great White North, be sure to check out the info on the Rogers version here.

Microsoft: Copy and Paste coming to Windows Phone in early 2011

Microsoft unveiled its mobile OS earlier this year and while the user interface looked promising, the lack of copy and...