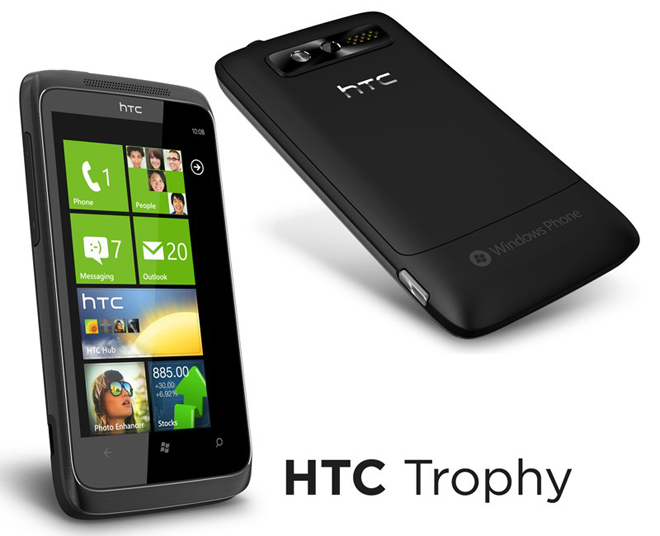 The  HTC 7 Trophy has been made official by HTC today. The HTC 7 Trophy was previously know as the HTC Spark and is slated to launch internationally on October 21st. The Trophy will be an affordable option for Windows Phone fans with a 3.8-inch touchscreen display, 1GHz processor, quad-band GSM (850/900/1800/1900 MHz), dual-band HSPA/WCDMA (900/2100 MHz), Bluetooth 2.1, WiFi 802.11 b/g/n, motion, proximity and ambient light sensor, Dolby Mobile with SRS surround sound, and a 5-megapixel camera with LED flash and 720P video recording.

Any good announcement is not complete without a marketing-based description of the handset and HTC was kind enough to provide us the following information:

HTC 7 Trophy harnesses the power of Xbox LIVE. Gamers will enjoy the speed and responsiveness of fast action gameplay supported by the phone’s high-performance 1GHz Snapdragon processor, and controlled through the vivid WVGA 3.8″ touchscreen. High-fidelity, virtual surround sound – through SRS WOW HD™ – brings a rich audio experience whether the user is playing a game, watching a video or listening to their favorite music.

The HTC 7 Trophy will debut internationally as a Vodafone exclusive in Germany, France, Spain, United Kingdom, Austria and Switzerland. It will also debut on M1 in Singapore. This Windows Phone 7 handset will be available starting October 21st. Full press release and detailed specs are available on the next page.

If you've been drooling all over the Windows Phone 7 smartphones announced this morning but are sick because you're stuck...