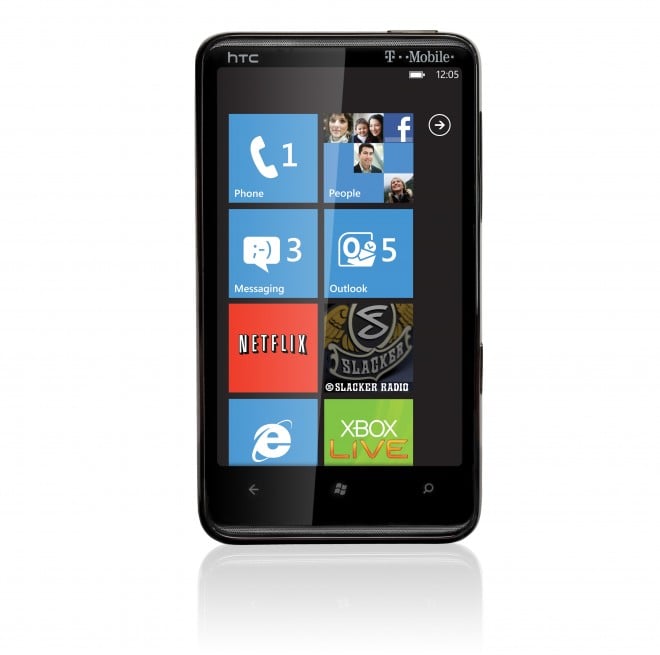 The HTC HD7 is official for T-Mobile. This Windows Phone 7 handset seems to be an EVO-like device, but all done up in Microsoft’s new OS that looks better than anything the company has cooked up in some time now.

The HD7 comes with a 4.3 inch capacitive display, 1 GHz Snapdragon processor, 5 megapixel camera with a dual LED flash, HD video recording, as well as a kickstand for viewing videos. It also comes with 16 GBs of internal memory and the expected WiFi, and GPS with turn-by-turn directions thanks to TeleNav GPS Navigator.

Of course, since this is a Windows Phone, you can expect the handset to come with a host Microsoft services. Fully integrated Exchange e-mail, and calendar will be there out of the box and the handset also comes with Office Hub, which offers Microsoft Word, Microsoft Excel, Microsoft PowerPoint, OneNote, and SharePoint Workplace at your fingertips.

Since this handset is made by HTC, you can also expect that this is will be one sexy and solid device. The HD7 won’t ship with the customized UI, Sense, that had saved some Windows Mobile phones and can be found on a handful of Android phones as well, but we may see it later down the road with updates.While the hardware is something that may attract you at first, Microsoft must make a fluid software experience that rivals current mobile OS kings iOS and Android, and it looks like it may have.

The HD7 will also ship with the following installed if you weren’t excited enough:

· Netflix for streaming thousands of movies and TV shows for Netflix members to watch instantly on the HTC HD7’s large, crisp screen.

· Slacker Radio for listening to free, personalized radio with over 130 genre stations and the ability for customers to create stations of their own.

· Xbox LIVE unlocks a world of games and fun, connecting customers to a global community of more than 25 million active Xbox LIVE members and offering easy access to Xbox LIVE features such as Friends, Avatars, Achievements, Messaging and more.

· Zune for loading people’s favorite media — music, movies, TV shows and podcasts — and taking it wherever.

The HD7 is a whole lot of phone, and we’re excited to see how the OS performs compared to the platforms it’s trying to demolish. You can expect the handset to hit the shelves of Magenta sometime in mid-November of this year. Who’s excited?