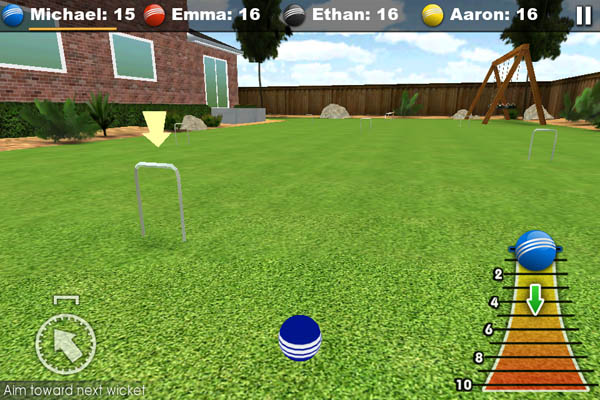 Anyone up for a game of Croquet!? I am! New from the developers at Inblosam, comes a new croquet simulation for iOS and Android… and yes, it works just fantastic on your iPhone, iPad, and any Android handset of your choice.

North America side, croquet has long been a backyard game, mostly for the kiddies of the clock. In fact, as a youngster I can remember we’d pull out the mallets and balls about once a year, and whack them around the backyard. At first, we’d do our best to play the game, but in the end it always ended up as a bit of a fiasco. We’d lose a few of the balls, perhaps break a mallet… you know, stuff like that.

In this game, vivid 3G graphics help enhance the gameplay. Controls are dead easy, and quite honestly, it’s a little bit of fun. For more goodness, you can even play croquet game via Apple’s Game Center. Pop it open, and play against a friend anywhere in the world!

Key features in Croquet include:

Even though this is a new addition to the App Store, it’s making headway already. It’s cracked the top 25 in sports games, and the top 50 in family games. Not too shabby at all. Personally, I prefer the gaming experience on the bigger display of my iPad, but hey, the choice is yours. iPhone, iPad or Android-powered devices get the thumbs up with this one, and I encourage you to give it a try. The good thing about this one is you won’t break your mallet… or lose your balls.

For more information you can hit up the links below, read the press release on the next page, or hit up croquetapp.com for more goodness.

We've got the rumor of the week for you Android fans. It looks like the Gingerbread SDK may drop sometime...