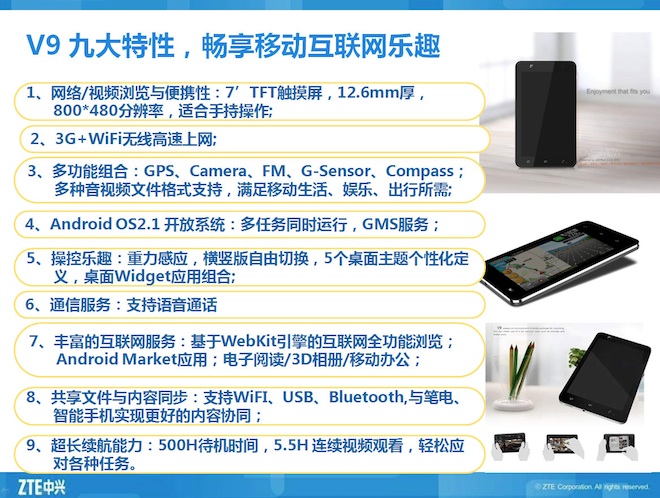 ZTE, a Chinese original design manufacturer who creates gadgets that they then sell to other companies who do nothing more than slap their name on it, some may go so far as tweak the colors, has launched a tablet called the “Light” in Beijing. Information is scarce at this point, or is horribly mangled thanks to the wonders of machine translation, but what we can make out is that it weighs 403 grams, is 12.3 mm thick, runs Android 2.1, has a SIM card slot that can handle 3G, has a 7 inch screen that has a poor 262,000 colors and a resolution of 800 x 480, does 500 hours of standby time and 5.5 hours of use.

When will these guys learn that taking an operating system meant for smartphones and then scaling it up to a device that has a screen twice the size doesn’t make it a successful competitor to the iPad? LG, who recently said they’re delaying their tablet, has cited that they’d rather wait for an operating system that’s best suited for the form factor. In other words, Google is working on either Chrome OS or a special version of Google Android that’s specifically built for these types of devices.

Anyway, I’m still in the camp that thinks tablets, whether they be running iOS or Android, are a useless product category. When you’re on the go use your phone, when you’re at home use your computer, and when you’re on the couch … either watch TV, talk to your kids, or call some friends over for a poker game or something. Sitting on your ass browsing Facebook sure is a wonderful way to kill a lovely autumn afternoon.

If anyone can translate the image above and send me an email [stefan at the rest should be easy to figure out] then it’ll be tremendously appreciated. A higher resolution version can be found here.

Quicky: Vodafone Spain to offer Samsung Galaxy Tab for 199 EUR on a contract

Vodafone's Spanish division will join the Samsung's Galaxy Tab distribution network and offer the device to its customers. The Android-powered...