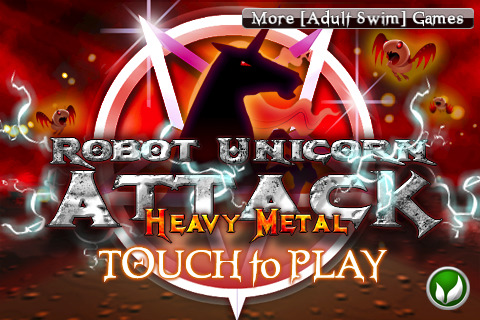 For many, Adult Swim’s Robot Unicorn Attack is a silly and pointless little game. Personally, I love it. I’ve had it on my iPad for about a week now, and every time I open it for a little gameplay, I have a good chuckle.

The object of the game is simple. Guide your robot unicorn to the right, and by jumping and dashing, and stay alive for as long as possible. It’s very similar to another one of my favorites, ‘Canabalt‘, but it’s got a few funny quirks to it. First off, the entire game is played with Erasure’s ‘Always‘ playing in the background. Second, the jump AND dash control adds slightly more control than you’d find in Canabalt (you can only jump, or bump into boxes and obstacles to slow down in that one).

At any rate, Robot Unicorn Attack is fast becoming somewhat of a cult phenomenon, and with that in mind… Adult Swim has released a re-skin. Yessir, Robot Unicorn Attack Heavy Metal Edition is now available. Gotta hand it to Adult Swim on this one. All they’ve done is re-skin the game, throw in some new music (in this case, Blind Guardian’s ‘Battlefield‘), and there you have it… a brand new game.

Should be interesting to see if Adult Swim releases any other versions of the game. I think I’m going to stick with the first edition here… but if I WAS going to pick up another, I might suggest to them Robot Unicorn Attack 80’s Edition, featuring the Huey Lewis and the News’ ‘Back in Time‘…. ahhhh haha now that would be funny. Can’t help but think of Marty McFly and Back to the Future when I think of ‘the news’. I digress, I’m babbling and am not making much sense. Download link for the new Robot Unicorn game is below.

In its annual meeting today, discount retailer Sam's Club confirmed that it will be carrying the iPhone and the iPad...