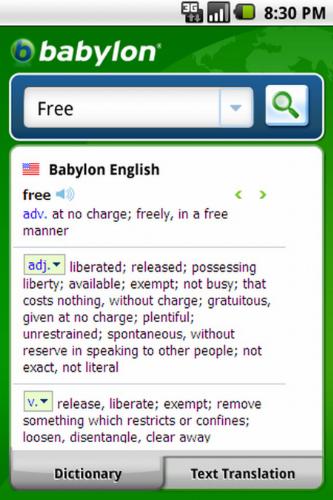 Ever needed a tool to quickly translate something on your Android smartphone? Sure there’s the web-based Google Translate or some native app that relies on that or some other service, but if you wanted more functionality (or more languages supported), you’ve probably visited a website like Babylon.com.

You won’t have to do that anymore, as they’ve launched their native app in the Android Market calling it Babylon2Go. The free to download application provides comprehensive dictionary results in over 75 languages, as well as full text translations between dozens of languages.

Those unfamiliar with Babylon should know they’ve won increased worldwide attention by adapting to fit and suit the needs of an international market by “continuously improving its software and products.”

Finally, before you dive into the Android Market to grab Babylon2Go, you may care to read what the company’s CEO Alon Carmeli has to say about their mobile app – he said: “Babylon is aware that our future is being shaped by technology and with mobile technology changing so quickly around us it is astonishing to watch where the next generation of mobile phones will take us.”