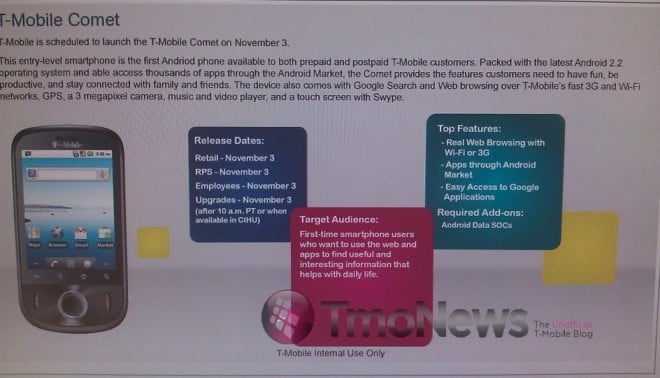 T-Mobile looks like it will be getting its own budget Android handset, but it won’t be from Motorola. It’s the Huawei Ideos – which will be renamed to the T-Mobile Comet – and it should hit the shelves on November 3rd.

We heard that T-Mobile may be getting this device in September, but this is about as solid of a confirmation as you can get without an official press release. The Comet will some with a 2.8 inch capacitive display (240 x 320), 528MHz CPU, 3.2 megapixel camera, 256 MB of RAM, Bluetooth, WiFi (b,g,n), and a MicroSD card slot.

The specs don’t scream high-end, nor is it trying to be, but this budget handset could be offered up rather cheaply when subsidized. The highest price I could see this handset at is around $150, but I wouldn’t be surprised if it came cheaper.

The Comet is also running stock Android 2.2 Froyo, which will make it the second handset T-Mobile will release with vanilla Froyo – the T-Mobile G2 being the first in a long time.

Vanilla Android theoretically means that the handset will be updated quicker than an Android handset with a custom UI on it, but I wouldn’t be surprised if the Comet never received another update. It’s low-end specs likely couldn’t handle what Gingerbread will offer, if it does indeed turn out to be some 3D UI overhaul similar to the Android 2.1 photo gallery. Hell, hopefully we’ll at least know what to expect from Gingerbread by that point, and maybe the Comet could receive it one day.

Power users obviously wouldn’t look twice at this device, but it could easily help the adoption of Android when someone who is ready to upgrade opts for the low-end smartphone instead of another feature phone. We’ve got a little under three weeks until the handset drops and the Comet could be a pretty nice gift for the kids, if you want to pay for their data plan, that is.

Now, if we could only get our hands on the Huawei S7, we’d be happy.

Sony Ericsson has decided to show a little preview of their upcoming Xperia X10 Android 2.1 update, and are expected...