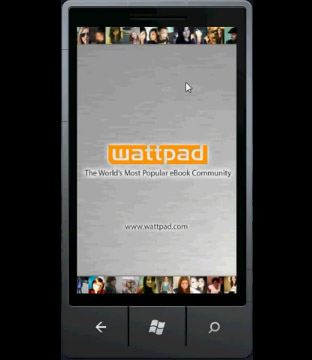 There’s one thing I like about Wattpad – they are sooo platform agnostic. The so called “YouTube for e-books” already has its application available for a number of platforms and they keep adding new ones the second these are announced. Just recently, we reported they plan to support BlackBerry Tablet OS and now they’re saying Windows Phone 7 is also on their list.

Obviously — like that’s the case with other mobile platforms — Wattpad for Microsoft’s new mobile platform will be available as a free download, and obviously Wattpad expects it to be a smashing success. Their application is already among the top ten free eReading apps in Apple’s AppStore and number one in the same category on RIM’s BlackBerry App World. In total, Wattpad app has been downloaded for over 1 million times per month.

The Wattpad Windows Phone 7 app will be available for download on the Windows Marketplace on a launch day. In the meantime, we’re sharing a video of the app in “WinPho7 action.” Enjoy. 😉

Ever needed a tool to quickly translate something on your Android smartphone? Sure there's the web-based Google Translate or some...