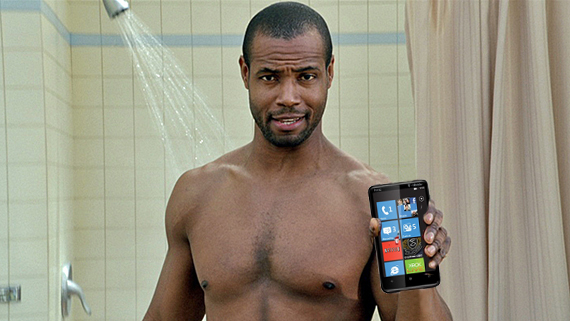 Isaiah Mustafa of Old Spice fame will be taking his stoic, manly persona on a marketing stint for Windows Phone in Australia, apparently. One can only hope that his pure, unbridled spirit of awesome is preserved in the transition from smelly things to technology things. While some may see this move as tacky piggy-backing on an established internet meme, Microsoft hasn’t been entirely unoriginal in their marketing; just check out this TV spot they’ve done with AT&T (note how many BlackBerrys are being used).
For those who don’t know Isaiah Mustafa, this guy did a series of ads for Old Spice body wash, which culminated in a fantastic series of interactive videos where he would answer questions from Twitter and Facebook commenters on YouTube. Here’s the ad he’s most well known for, but be sure to check out the Old Spice YouTube channel for the whole selection.

Microsoft has been pretty clever about cashing in on popular internet memes lately – just look at the Double Rainbow guy, although that wasn’t especially well-recieved. The Windows Phone launch campaign has some $500 million in marketing to play with, along with another $36.8 billion in the vault if needed, which combined with a decent (if nascent) user experience and a wide host of manufacturing partners could quickly propel Microsoft’s new mobile OS to compete with established smartphone leaders. Of course, Apple still has a big lead on Microsoft when it comes to marketing, but I think Windows Phone will be well-armed with Isaiah Mustafa on its side.

Without further ado, here is the man himself introducing his intentions for Windows Phone 7 in Australia.

Also, it’s worth noting that he’s no stranger to working with phones, either. Not only did he have a voicemail generator, he has also done some modding on the side. Obviously.

The analysts and researchers at IDC are cautiously optimistic about the chances of Windows Phone 7 in the smartphone market...