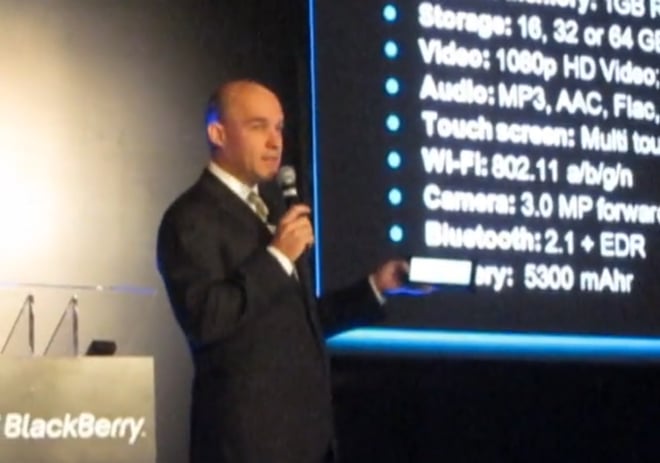 At the GITEX conference in the Dubai, RIM co-CEO Jim Balsillie talked up their new BlackBerry PlayBook tablet. After whipping out what looked like a working device, he showed off a full spec sheet that not only confirmed that the PlayBook would have a 5300 mAh battery, but that a version with 64 GB of storage would be available, on top of the 16 and 32 GB models we saw at DevCon.

RIM was tight-lipped about the battery at launch (and still didn’t say what 5300 mAh worked out to in terms of hours and minutes), but it’s good to see some of the finer details of their tablet being nailed down. It’s hard to tell for sure what the iPad’s battery is for comparison, but the comparable Samsung Galaxy Tab has a smaller 4000 mAh battery. The added tier of memory is a bit of a necessity since there’s been no sign of support for microSD cards (or SD, for that matter). As a machine that will be built for media, you’d think they would provide some kind of removable storage. On the other hand, since a lot of stuff will just be beamed over from a BlackBerry smartphone, it sounds like there will be a sufficient amount built in to keep most people happy.

Balsillie also announced that the Torch and App World 2.0 would be available in the UAE, which is great news considering BlackBerry was on the verge of a ban not too long ago. Here’s the video of Balsillie’s announcement at GITEX.

By most common-sense accounts, Apple had a strong fiscal fourth quarter with $20.3 billion in revenue and more than $4.3...