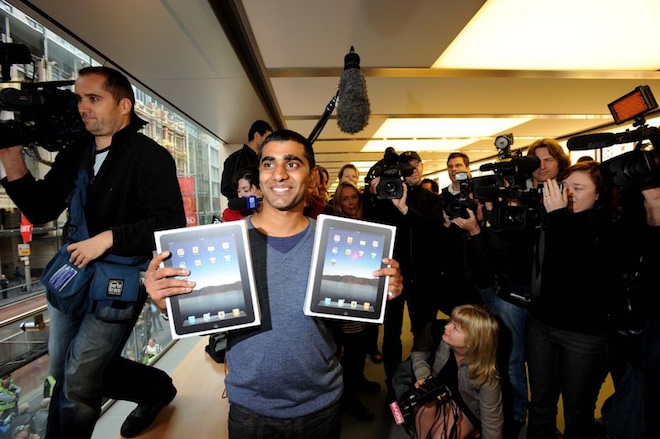 Research firm iSuppli, who specializes in identifying the exact components inside a device and generating a rough bill of materials that competitors can then use as a benchmark for building their products, has raised their forecast of iPad shipments from 12.9 million in 2010 to 13.8 million. Hot on the heals of Apple’s Q4 financial results where they revealed that they’ve shipped over 4 million iPads, iSuppli says Apple has finally been able to ramp up production to meet consumer demand.

“In its previous iPad forecasts, iSuppli noted that the only constraint on shipment growth now is production—and not demand,” said Rhoda Alexander, director of monitor research for iSuppli. “The only factor limiting production is the availability of key iPad components, such as the Field Fringe Switching (FFS) LCD panels, projected capacitive touch screens and NAND flash. Despite ongoing yield issues, Apple’s suppliers have steadily increased monthly production to meet Apple’s demand. Production rates are now on target to meet the expected strong fourth-quarter sales.”

The numbers for next year and the year after have also been tweaked. For 2011 the figure of 36.5 million iPads is now 43.7 million, and for 2012 it’s 63.3 million units versus 50.4 million. Now I find all this a bit hard to swallow since I’m still failing to see the usefulness of a product that fits between the space that occupies my laptop and my smartphone. It’s a void created by a marketing department that is pulling our strings to make us believe that we need to be in front of a screen during every waking moment of our day and the instant on capabilities of the iPad means everyone should impulsively check their Facebook news feed to see if Jenny is cooking tacos tonight.

Let’s wait to see what Google has to say about the tablet space, that’s what they’re supposed to be announcing early next year at either CES or Mobile World Congress.

Aye, the Irish eyes be smilin' upon ya my boy, my friends down under at foof Bags have released some...