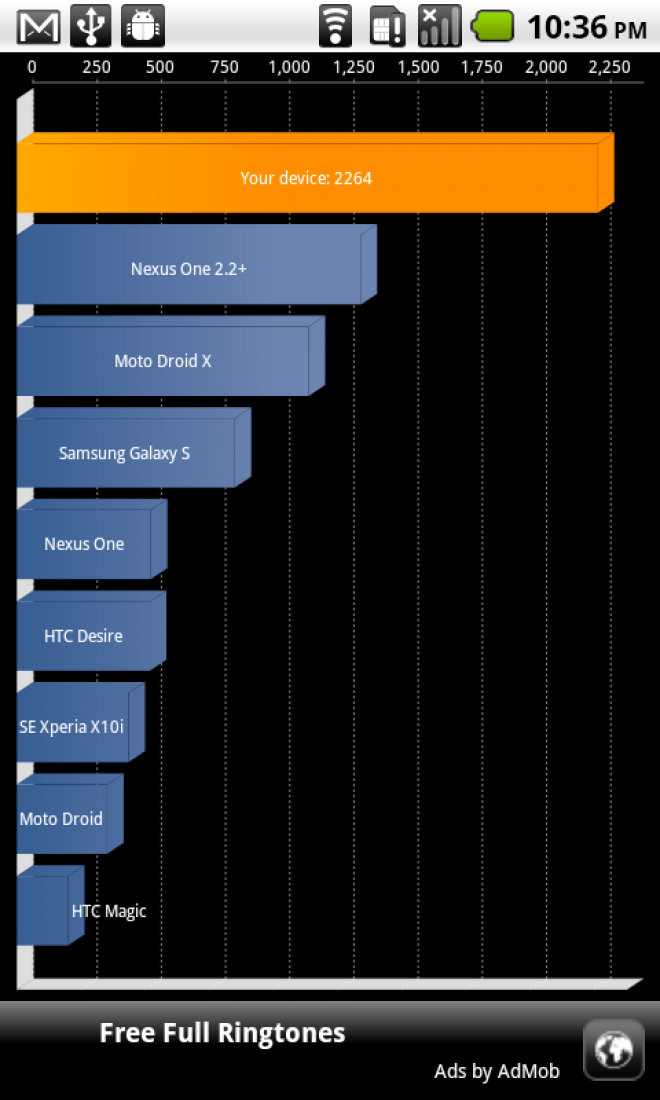 The T-Mobile G2 has been under fire about its performance since the carrier announced that the handset would come with an 800MHz processor, making skeptics believe that the G2 wouldn’t be able to hold its own against the competition. That was disproved through benchmarks, yet some still look at the 800MHz number and believe it’s just too slow. Well skeptics, the T-Mobile G2 has just been overclocked to 1.3 GHz.

While the G2 is still not permanently rooted, a successful overclocking of the device should definitely hold some over. The overclock was accomplished while using the temporary root method, so we’re not sure if it will go back to normal after the root is taken away.

When benchmarked on Quadrant, the G2 nailed a score of 2264, which is very impressive, and when running the Linpack app, the G2 got 40 MFLOPS (Floating point Operations Per Second). My stock, unrooted G2 got a score of 33.33 on Linpack, and a Quadrant score of 1587, so the overclock is definitely helping the device out in terms of speed, obviously.

While the overclock looks to be pretty stable, running certain applications will cause the handset to crash – Google Earth is one that will make this happen. The method needs a little refining, but it’s certainly better than nothing and we can’t wait to try it out.

A release should be on its way sometime today according to a recent tweet of the person who has made this all happen, Coolbho3k, and the handset can be overclocked, stably, to 1.4 GHz.

While not everyone who gets the G2 will be overclocking, this goes to show that the new Qualcomm CPU is definitely more powerful than T-Mobile and HTC allowed it to be. The handset was likely underclocked to help battery life, as this specific CPU can run at 1GHz without hacking. Hopefully the public release of this method will be on its way very soon, as I’ve got some battery power to kill.

Looks like the Android 2.2 Froyo update is beginning to roll out for MyTouch 3G owners who've been stuck on...