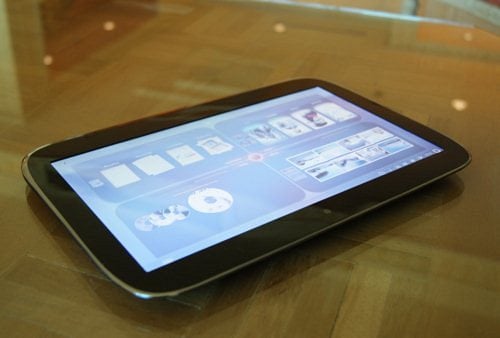 It looks like Lenovo is taking a cue from LG and holding off on an iPad competitor until the Honeycomb version of Android is released. Lenovo, who doesn’t have much of a presence in the mobile market, is looking to make a splash with its very own tablet. If Android Honeycomb arrives on time, which is some time in early 2011, you should be seeing a Lenovo right along with it, too.

The news on the tablet side, however, is somewhat more promising for those hoping for a Lenovo-banded “Le Pad” in the U.S. Read said Lenovo may introduce tablet solutions for its commercial and consumer business next year, possibly by the summer, or four months after the official release of the tablet-friendly Android operating system. Read cautioned, however, that that time-frame is contingent on the next major Android release, code-named “Honeycomb”. Honeycomb is still Android but a version specifically designed for tablet computers. If Android’s Honeycomb slips, it’s possible that timeline could change, as well.

Unfortunately, for Lenovo and LG, the set back could hurt its case in losing ground to the iPad and the upcoming — albeit outrageously priced — Samsung Galaxy Tab. While Android in its current form isn’t designed for tablet use at all, waiting for a more optimized version for the large screen could end up hurting Lenovo’s cause.

Lots of Android fans, and the few who have been wanting a non-Apple tablet, have been waiting eagerly for the Samsung Galaxy Tab. Given its smaller stature compared to the iPad, we were imagining something more along the lines of the $300-500 range. The fact that it’s sporting an operating system not designed for tablets is even more reason to lower its price.

Most other bloggers and analysts are calling the Galaxy Tab DOA – Dead on Arrival – much like Steve Jobs did earlier this week. Given its rushed-to-market feel, both in terms of hardware and OS, both Samsung and its first announced partner, Verizon, should really reconsider its price point.

For Lenovo and LG, waiting for the right time seems like a better move if not a bit of a gamble. If I were going to pick up an Android tablet in the future, I would definitely want one that was meant for a tablet. Software and an excellent user experience can make up for a bit of plasticky feeling hardware with a bland design.