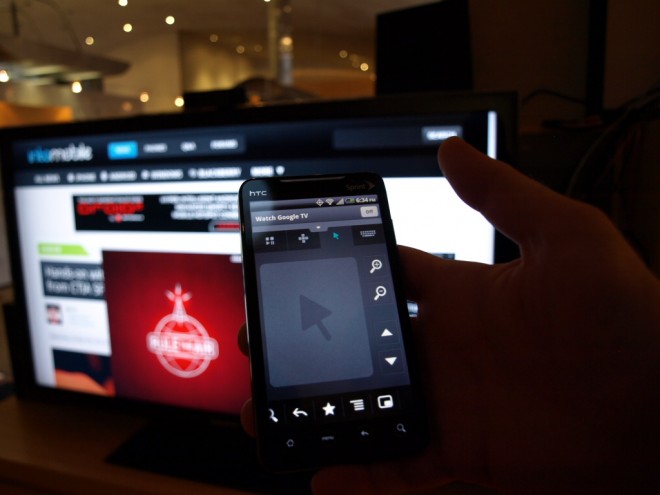 So you’ve just got yourself a Logitech Revue for Google TV, and you’d rather not use the bulky keyboard/remote that came in the box, eh? Well, you don’t need it, all you really need is the nifty Android app that turns your phone into a remote control for Google TV. It’s free, and available now.

One thing about the Revue that annoys me is that it doesn’t ship with the smaller remote in the box. Not even for a higher price tag. Still, I’m thankful for this Android app since I won’t be paying an extra $130 for another remote.

The app is pretty powerful, but it may be easy to get lost in the app, as there is a lot going on. We got some hands-on time with the Revue and the remote application after the official announcement at CTIA SF 2010, and we think that all the features can get a little overwhelming. That said, you can do just about anything with the application that you can with the actual remote, and then some.

One such feature is voice search. All you need is to tap a button, and say what you’d like to watch, and your phone will send it right to the Revue, and search for your query. The app gives you access to your standard remote buttons like channel up, down, as well as volume control. You can also turn everything off with a press of a button from your phone. But one of the coolest features we saw while using the app is if you’re watching a video on YouTube on your Android smartphone, you can choose to send the video to your TV. So, if you had your TV and Revue powered off, all you’d need to do is share the YouTube video through the Harmony Link, and your TV and Revue will automatically turn on, fire up Google TV, and begin playing your YouTube video. Slick.

There are many other features you can get from the application, so if you’re a new owner of the overpriced Revue box, go ahead and check it out if you’re sporting an Android phone. An iOS application is on its way as well, but no release date has been given.

Microsoft: We have a lot of work to do in mobile

On the eve of the launch of Windows Phone 7, Microsoft is acknowledging that getting back to the top of...