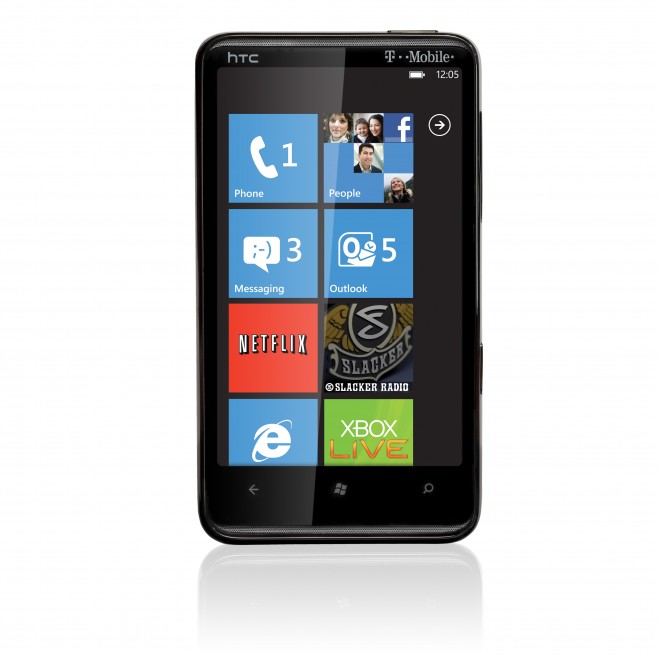 T-Mobile confirmed via Twitter that the HTC HD7, its flagship Windows Phone handset, will be available in stores starting November 8th. This date is a pleasant surprise for HD7 fans as the 8th is a bit ahead of its previously announced mid-November availability. This super-sized smartphone will be priced at $199.99 with a two-year agreement and after a $50 mail-in rebate. The HD7 will be joined by the Dell Venue Pro, a portrait QWERTY slider which is expected to launch at an undisclosed date in November.

The HTC HD7 is the big daddy of the Windows Phone 7 handsets and offers a roomy 4.3-inch, 480×800 capacitive touchscreen display. Other hardware includes a 1GHz processor, 5-megapixel camera with dual LED flash and 720P recording, 16Gb of on-board storage, WiFi, GPS, and Bluetooth 2.1. Software goodies are many on this high-end handset and include Netflix streaming, Slacker Radio, and a mobile version of the Microsoft Office productivity suite. An integrated kickstand and support for T-Mobile’s TV service makes this handset an excellent choice for those that like to consume media on the go.

Choices are numerous for customers in the US who are in the market for a Windows Phone handset. T-Mobile customers can pick from the HD7 and Dell Venue Pro, while those signing up with AT&T can choose from the AMOLED-equipped Samsung Focus, the HTC Surround, and the side-slider LG Quantum. Anyone have a favorite picked out or are you still undecided?