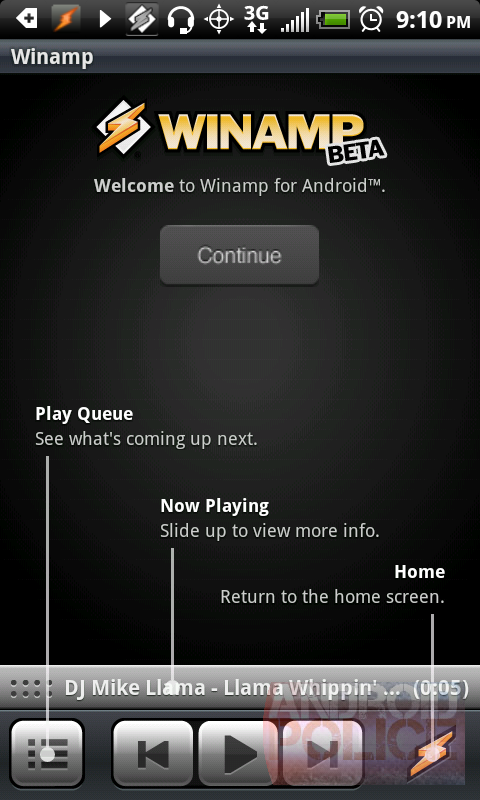 Several months ago my 4 year old 15 inch IBM ThinkPad T61 died and I immediately panicked since it was the machine I used to do my job. When it came time to buy a new laptop, the 17 inch MacBook Pro stood out as the best possible replacement due to the super high resolution screen and relatively small footprint compared to my old black box. Since “switching” I’ve had very few regrets, but one that stands out far above the rest is the lack of a Mac version of Winamp, the music player I’ve been using since the late 90s. The clutter free, easy to use interface. The minimal impact on system resources. The cute “Winamp, it really whips the llama’s ass!” that played after you ran the program for the first time. It was, is, and always will be, my music player of choice. These days I don’t even have MP3s, opting to stream everything using my Spotify Premium account, but I digress. Winamp is now available on Android, and although it’s a beta it manages to do several things quite well.

According to Android Police Winamp comes with a lock screen widget so you can control playback without too much of a hassle. If you use the desktop Winamp client then you can sync your library over WiFi. Scrobbling with Last.fm is enabled. Play queue support, and trust me when I say that no other music player comes close to matching the ease of use of making a playlist, is built in. The UI is also “fluid”, which I guess means smooth.

If you’ve got an Android device, and I’m kicking myself in the butt right now for selling my Nexus One around 3 weeks ago, then give this app a shot and let us know what you think about it in the comments below.

T-Mobile to start selling the Motorola Defy on November 3rd for $99.99

Although we knew T-Mobile will get to sell the Motorola Defy, up until now we didn't have the exact release...