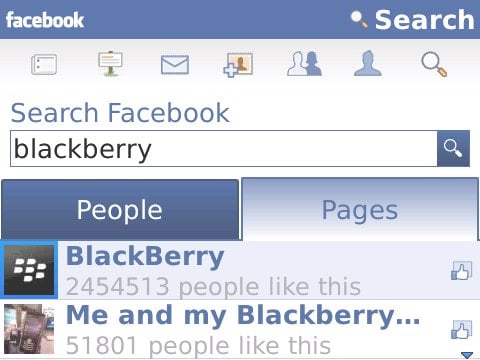 RIM has launched a new version of their Facebook application in the BlackBerry Beta Zone which includes some significant updates, like a separate inbox for all of your Facebook messages, a unified search that also ties in with BlackBerry 6, and a bunch of UI improvements.

As usual, Facebook for BlackBerry not only lets you keep track of your friends’ status updates, upload pictures from the phone’s camera, like, and comment on items in the news stream, but it also ties in directly with the native address book, so you can see their latest activity just before you’re about to call or e-mail them. Integration with the Messages app is also fantastic – light-speed push allows you to get comments right as soon as their published, and reply with startling quickness.

To get downloading Facebook 1.9, you’ll have to register and apply in the BlackBerry Beta Zone. RIM also promises that the next version will include support for Places, so you can share your check-ins with friends without having to resort to other social networks like Foursquare. Chat is also on the way, and really couldn’t come any sooner.

You know what, nevermind playing around in the BlackBerry PlayBook in the Adobe AIR simulator, how about a live device...