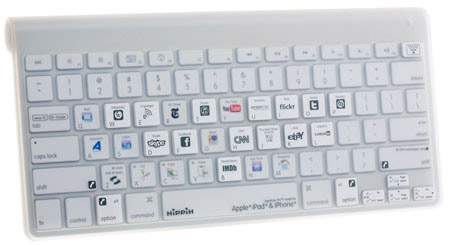 A company called Adorama launched a new accessory for iOS devices – iBoard Bluetooth Wireless Keyboard. As you can imagine, this keyboard is made to sing along such Apple’s products as iPhone, iPod Touch and of course the iPad.

Adorama’s trick is in including single-stroke shortcuts that allow users to quickly launch their favorite apps and websites.

The keyboard works in pair with a mobile app called AppsKey Pro, using which users define shortcuts. In other words, the application works like a programming link that allows the iBoard and an iOS device to work hand-in-hand.

Additionally, the package also includes a waterproof skin made out of silicone to protect the keyboard from any spill.

All this could be yours for $69.99 which is not that bad. Adorama says their keyboard is manufactured to the same specs as the original Apple wireless Bluetooth Keyboard…

And if all this sounds compelling to you – check out Adorama’s website for few additional details.

The good folks at Vaja Cases have long been pumping out quality high-end products. At the moment, I have a...