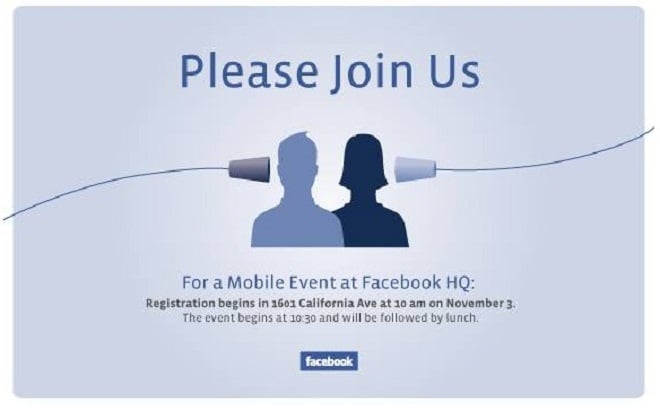 A fresh invitation just hit our inbox which says Facebook will hold a “mobile event” next week. Will this be the introduction of the much-rumored Facebook phone?

As you may recall, TechCrunch broke the news that the company was working on its own phone based on Android. The goal of the Facebook phone is to make a mobile phone that’s built from the ground up with social in mind. Your social networking friends would be your address book and so on.

The company denied these reports but there are still rumors that it’s working with INQ on a device that will hit AT&T. Assuming it’s available soon, introducing it now would be a good way to get in on the holiday buying season.

Of course, that may be a bit too premature, as working on an OS and hardware takes a long time. An obvious reason for the event would be to officially introduce an Apple iPad app which is optimized for the larger screen and this app could be the basis for the Facebook app we’ll see for the glut of tablets on the horizon.

We also know that the company is testing deals for its Facebook Places location-based service and this could be a good way to show this off.

The world’s largest social network has also repeatedly said it wants to be a mobile platform and this announcement could give us an idea of what that means. You know it wants to open up mobile to its developers like Zynga but there hasn’t been a solid way to do that through its apps yet.

Whatever the announcement winds up to be, you can be sure that we’ll be there to give you up-to-the-minute coverage and analysis.

Anyone out there looking forward to a Facebook phone? Does this even make sense with the wide variety of strong smartphones out there?

Hmm. It looks like AdMob CEO Omar Hamoui is leaving Google after only five months of being under the wing...