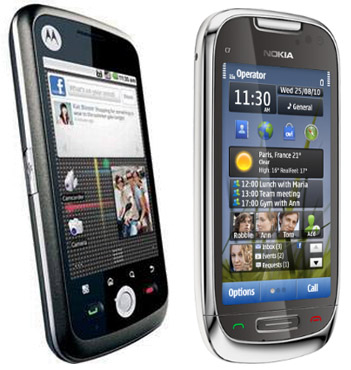 Indian consumers have two new smartphones to choose from. The first one is the Android-powered Motorola Quench XT3, an all-touchscreen device that runs Android 2.1 Éclair. Rest of the features include a 3.2-inch HVGA display, 3G and WiFi connectivity, GPS, 256MB of RAM that’s coupled with 512MB of ROM, 3-megapixel camera with flash, Bluetooth, 600MHz CPU, 3.5mm headset jack and a microSD memory card slot. The XT3 is selling for 12,990 INR, which is about $300.

Te other device is the Nokia C7, the one that is also known as the second Symbian^3 smartphone (aside from the N8). Its feature set includes an 8-megapixel camera, 3.5-inch AMOLED nHD touchscreen, HSPA and WiFi connectivity, GPS, Bluetooth, 8GB of built-in storage that’s further expandable with microSD memory cards. The C7 will start selling soon for 19,490 or approximately $440.

Consumers won’t mistake by choosing any of the two — the C7 comes with a better camera, while Motorola’s baby rocks 100,000-strong application store – Android Market.