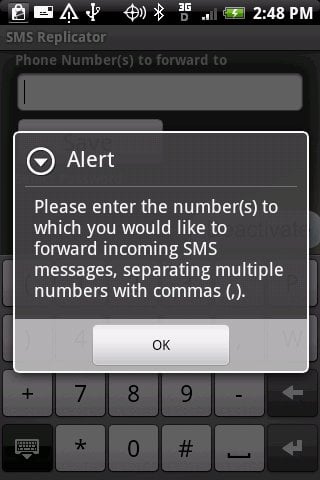 Ever wanted to keep track of all the text messages your girlfriend or boyfriend receives? How about your kids? In other words, have you ever wanted to spy on someone? There’s a new and controversial app available for Android smartphones that does just that.

It’s called Secret SMS Replicator and it allows for secret surveillance of another person’s incoming text messages. Sure it’s potentially insidious and it’s definitely not made for everyone, but I’m quite confident some folks will appreciate it… a LOT!

Here’s how to do it:

Grab your boyfriend’s or girlfriend’s phone while he/she is in the shower. Download Secret SMS Replicator onto his/her Android phone and let it run secretly, unable to be detected. Once that’s on place, it will be BCC’ing you all of his/her incoming texts.

We don’t suggest you install Secret SMS Replicator on anyone’s phone, but if you do want to proceed nevertheless, simply search for the app in the Android Market.

UPDATE: Some users have reported they couldn’t find the application in the Android Market, hinting us it may be banned. If you want it badly, your best bet is to contact developer (DLP Mobile) for download instructions.

Lack of some "standard for iPhone apps" on the iPad has opened a window of opportunity for developers. Apalon is...