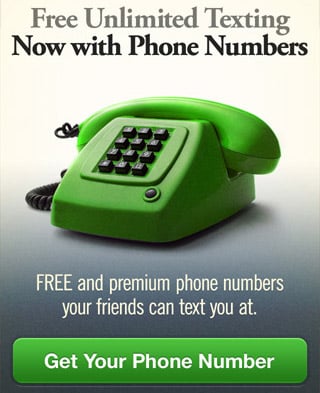 Popular SMS service/app textPlus is going one step forward by introducing real phone numbers, allowing users to chat with their buddies that don’t have to run textPlus! You either get an automatically assigned phone number or select a specific area code and number for $1.99/year.

At the moment this is a U.S. thing only, but I’m sure it will be expanded to other places in no time. In other words, iPod Touch and iPad WiFi-only owners can now use textPlus along with some VoIP app and effectively turn their devices into full-fledged phones (when in hotspot, that is).

International users can use textPlus for free app-to-app messaging anywhere in the world, and Canadians can also text within Canada and to the U.S. using the textPlus short code – 60611.

In the other textPlus news, they now have 25 million people using the service which have sent over 4 billion messages! In total, textPlus for iOS and Android devices has been downloaded 10 million times. Impressive!

Gone are the days of exclusive deals with magazines where celebrities are exclusively sharing bits of their personal lives with...